In a sign that companies continue to try aligning supplies closer to demand, wholesale inventories rose 3% in the 12 months ended March 3, less than a third of the rate that sales expanded. The Commerce Department reported that the inventories-to-sales ratio declined over the past year, though it was little changed from recent months. The ratio, which indicates how leanly businesses are operating, is about where it was at the end of the recession.

American employers had an annual rate of 5.7 million job openings in March, up 1.1% from February and continuing to outnumber new hires, according to data from the Bureau of Labor Statistics. Since January 2015, a gap between openings and hires has suggested unmet employment needs, which could possibly result in higher pay for workers or investments in labor-saving technology and processes. Compared to the number of unemployed workers, the rate of openings sank to its lowest level since January 2001. 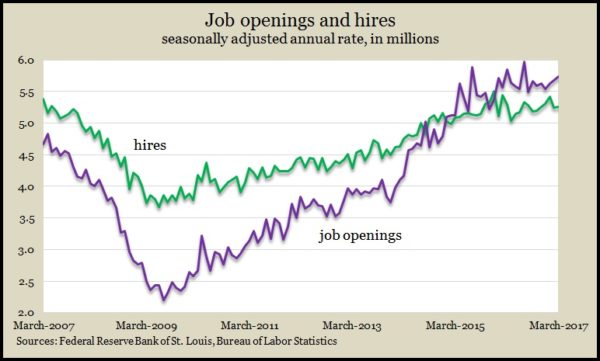 Inflation on the wholesale level rose 2.5% year-to-year in April for the highest such increase since February 2012. The Bureau of Labor Statistics said that even excluding volatile costs for food, energy and trade services, the Producer Price Index gained 2.1% in the last 12 months, the fourth consecutive increased rate. The Federal Reserve Board has targeted 2% as the overall inflation rate closest to representing sustainable growth in the economy.

The moving four-week average for initial unemployment claims rose for the second week in a row, still 32% below the 50-year average. The four-year stretch of low jobless claims suggested continued employer reluctance to let go of their workers. Labor Department data show claims below the long-term average since the beginning of 2013.

A key measure of consumer spending, retail sales, rose less than analysts expected in April after a slight gain in March, which initially estimated as a decline. The Commerce Department reported that nine of 13 categories had higher sales in April. Even excluding volatile automotive and gasoline sales, retailers gained less than analysts expected. Year-to-year, retail sales grew by 4.5%, just above the long-term average but down from a 4.8% growth rate in March.

The broadest measure of inflation rebounded in April from a slight decline in March. The Consumer Price Index made the slightest gain after excluding volatile food and energy prices. The Bureau of Labor Services reported that the more telling year-to-year inflation rate was 1.9% excluding food and energy, marking the third consecutive decline in the rate.

The Commerce Department said business inventories rose 0.2% in March, outpacing sales, which stayed the same as in February. The inventories-to-sales ratio also was unchanged, remaining about where it was at the beginning of 2015 and just after the recession ended in 2009. In the past year, inventories rose 2.6%, vs. a 6.5% growth in sales.

A harbinger of consumer spending – consumer sentiment – rose again in May, according to preliminary data from the University of Michigan. The longstanding sentiment index gained for the third month in a row, reaching its highest level since its 10-year high in January. An economist with the survey said wide partisan splits in expectations are narrowing, and consumers are indicating a spending increase in 2017 of about 2.3%, which is about average for the last 17 years.