After reaching an all-time high in January, the level of credit card debt contracted in March for the second month in a row, according to a Federal Reserve Board report on consumer debt outstanding. Economists use credit card debt as a sign of consumer spending, which accounts for about 70% of U.S. economic activity. The $2.6 billion decline in credit card debt in March was only partially offset through credit used for car financing and student loans.

American employers had a record-high annual rate of 6.55 million job openings in March. Openings continued to outnumber new hires, according to data from the Bureau of Labor Statistics. Since January 2015, a gap between openings and hires has suggested unmet employment needs. That should lead to higher pay for workers, which would boost consumer spending. The rate at which employed workers quit their jobs matched a post-recession high, suggesting workers are more confident in their ability to get rehired. 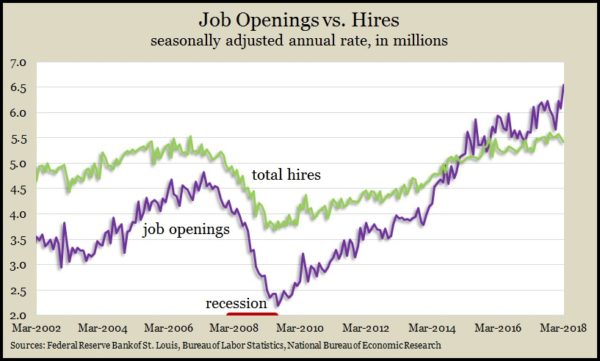 In a sign that companies continue to try aligning supplies closer to demand, wholesale inventories rose 0.3% in March, the same rate at which sales gained. Year-to-year, inventories rose 5.5% while sales increased 7.3%. The Commerce Department reported that the inventories-to-sales ratio remained steady with February. The ratio indicates how leanly businesses are operating.

A decline in food prices – the fourth in five months – resulted in lower wholesale inflation than analysts expected in April. The drop in food prices helped offset much higher prices for aluminum and steel, according to the Producer Price Index. The Bureau of Labor Statistics reported that wholesale inflation over the previous 12 months rose 2.5%, below the 2.9% rate in March but above the 2% overall inflation target set by the Fed.

The moving four-week average for initial unemployment claims fell to its lowest level since December 1969. The rolling measure of jobless claims reached 39% below the 51-year average, according to Labor Department data, showing the persistent strength of the employment market, which should encourage more consumer spending.

The broadest measure of inflation rebounded in April from a slight decline in March. The Consumer Price Index made a 0.2% gain largely because of a 3% increase in gasoline prices. After excluding volatile food and energy prices, the CPI rose 2.1% from April 2017, according to the Bureau of Labor Statistics. That tied March for the highest inflation rate since early 2017.

A harbinger of consumer spending – consumer sentiment – was unchanged since the end of April, according to preliminary survey data from the University of Michigan. The longstanding sentiment index remained historically high for consumers’ regard for current economic conditions. Expectations for the near term also were fairly optimistic. An economist with the survey said consumers are indicating a spending increase through mid-2019 of about 2.7%, which is above average for the last 17 years.