American employers continued to have more job openings than the nation had unemployed job seekers in March. The Bureau of Labor Statistics reported 7.5 million openings, up 4.8% from February. That was 1.3 million more than the number of unemployed persons in March. The difference illustrates the low supply of potential workers available, which should lead to higher pay for workers and boost consumer spending. Openings have outnumbered the unemployed for 13 months in a row. 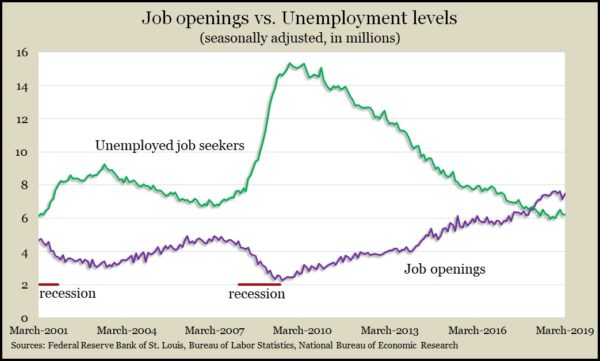 The level of credit card debt contracted in March for the first time in eight months, according to a Federal Reserve Board report on consumer debt outstanding. Economists use credit card debt as a sign of consumer spending, which accounts for nearly 70% of U.S. economic activity. Credit card debt declined $2.2 billion from a record of nearly $1.06 trillion in February.

The four-week moving average for initial unemployment claims rose for the third week in a row after hitting its lowest level since November 1969. The rolling measure of jobless claims was 38% below the 52-year average, according to Labor Department data, showing the persistent strength of the employment market, which should encourage more consumer spending.

The Commerce Department said the trade balance widened 1.5% to $50 billion in March, which was slightly lower than analysts expected. The trade gap grew on a 1.1% increase in imports and a 1% increase in exports. The trade deficit detracts from economic growth, as measured by the gross domestic product. The number is volatile month to month, particularly lately amid trade conflict.

In a sign that companies may be trying to align supplies closer to demand, wholesale inventories declined 0.1% in March, whiles sales gained 2.3%. Year-to-year, inventories rose 3.9% while sales increased 6.7%. The Commerce Department reported that the inventories-to-sales ratio fell steeply. The ratio indicates how lean businesses are operating.

Inflation on the wholesale level remained relatively calm in April, according to the Bureau of Labor Statistics. Excluding volatile costs for food, energy and trade services, the Producer Price Index rose 2.2% from April 2018, the same rate as in March. The so-called core rate was below the 12-month average of 2.7% and right around the 2% overall inflation target set by the Federal Reserve.

A 5.7% increase in gasoline prices boosted the broadest measure of inflation in April. The Consumer Price Index  rose 0.3% after gaining 0.4% in March. After excluding volatile food and energy prices, the CPI rose 2.1% from April 2018, according to the Bureau of Labor Services. That was the first increase in the inflation rate since November. Gas and housing costs were among the leading gainers. Used car prices fell 3% from April 2018.