The Federal Reserve reported that consumer credit grew by nearly $8 billion in March, which was less than analysts had expected. The debt expansion continues to be concentrated in non-revolving debt such as car financing and – the biggest factor – student loans. Credit card debt, which is a sign of consumer confidence, fell. 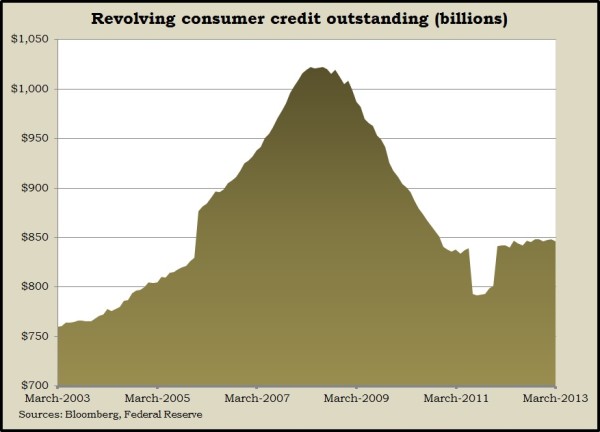 The Commerce Department said wholesale inventories rose 0.4% in March, reversing a decline in February. But warehouses filled more than demand warranted, with sales at the wholesale level falling 1.6%. The resulting ratio of wholesale inventories increased slightly, meaning companies are less likely to raise production or add workers if demand picks up.

The moving four-week average for initial unemployment claims dipped to its lowest point since January 2008, providing another sign that employers are reluctant to let workers go. Labor Department data showed jobless claims declining for three weeks in a row, maintaining a level below the historical average, which is a positive indicator for employment markets, though hiring remains constrained.