As a reminder of opportune conditions just prior to the coronavirus pandemic, February data from the S&P CoreLogic Case-Shiller home price index showed continued momentum for the U.S. housing market. The index registered a 3.5% increase in price in the preceding year for its 20-city composite. Each of the cities experienced rising prices, 17 at paces faster than in January.

The Conference Board said its consumer confidence index fell a record 90 points in April. All of the downfall resulted from consumers’ lower assessment of current economic conditions. Overall, consumers’ expectations for coming months rose, according to the business research group, based on hopes that the economy would recover as authorities relax pandemic-wary stay-at-home orders.

The U.S. economy sank at an annual pace of 4.8% in the first quarter, its first setback since 2014 and the most severe since the end of 2008. Analysts expect the first estimates of the quarter’s gross domestic product to get worse with subsequent updates from the Bureau of Economic Analysis because shutdowns from the COVID-19 outbreak didn’t begin until the last three weeks of the period. Consumer spending, which accounts for about 70% of GDP growth, fell at an annual rate of 7.6%. 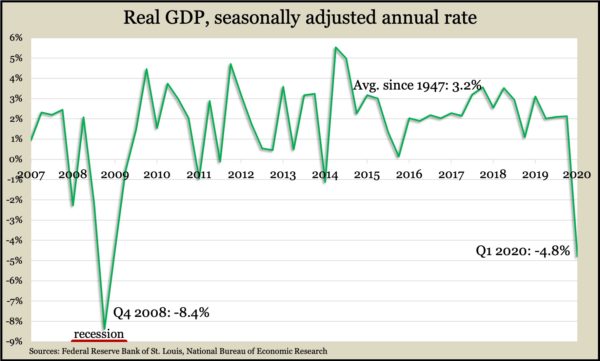 The National Association of Realtors said its index of pending home sales dropped 20.8% in March. Signed contracts were down 16.8% from March 2019, the trade group reported. Calling the setback only temporary, an economist for the Realtors cited low mortgage rates as a reason for listings and offers to rebound in months ahead but still forecast a 14% sales decline for the year.

The four-week moving average for initial unemployment claims receded slightly from weeks of record levels but still reflected a historic collapse in employment. The Labor Department said the four-week average came to 5.03 million applications, following more than 30 million new claims filed in the preceding six weeks. With state problems handling so many claims, some economists say the federal figures undercount the impact of job losses resulting from COVID-19 shutdowns.

The Bureau of Economic Analysis said consumer spending declined a record 7.5% in March. The dip in spending was the most severe in 61 years of data and just hinted at the devastation from the pandemic, given that most stay-at-home restrictions didn’t start until mid-month. Personal income fell by 2%, according to the report, including a 3.1% reduction in wages and salaries.

Shutdowns in production, supply chain and demand triggered the biggest decline in U.S. manufacturing since the Great Recession, according to the Institute for Supply Management. The trade group’s April index, based on surveys of industry purchase managers, contracted for the second month in a row to its lowest level since April 2009. The index’s production component was the weakest on records dating back to 1948. A spokesman for the group said the overall setback was likely even greater than the index reflected.