Another sign of the ragged U.S. housing recovery showed up in February house prices. The S&P Case-Shiller index reported a higher-than-expected 5% increase in year-to-year prices for its 20-city composite. That’s the 26th consecutive advance, though down from 13.7% in November 2013. Overall, the index remains nearly 10% below the July 2006 peak. Adjusted for inflation, house prices are up 1.7% a year since 2000.

A leading indicator of consumer spending, consumer confidence dipped in April. The Conference Board said consumers’ assessment of current conditions as well as their expectations of near-term prospects declined slightly from March. An economist with the business research group blamed weaker employment reports and suggested the U.S. economy is unlikely to gain much momentum in coming months.

Economic growth slowed to a 0.2% annual rate in the first quarter, according to an advanced estimate of the Gross Domestic Product. The Commerce Department showed that weaker exports, lack of business investments, government cutbacks and less consumer spending helped lead to the drop from a 2.2% growth rate in the last three months of 2014. Consumer spending grew at a 1.9% rate, down from 4.4% in the previous quarter. The Fed’s favorite inflation gauge remained below the 2% area preferred by the central bank.

Employers remained reluctant to let workers go, according to the moving four-week average for initial unemployment claims. Labor Department data showed jobless applications down for the first time in three weeks in a row and still below the 48-year average level.

The driver of 70% of U.S. economic activity, consumer spending rose in March less than analysts expected, although it was the second gain in a row and the most since November. The Bureau of Economic Analysis said personal income barely budged, which pushed the personal saving rate to 5.3% from 5.7% in February and further below the all-time average of 8%. 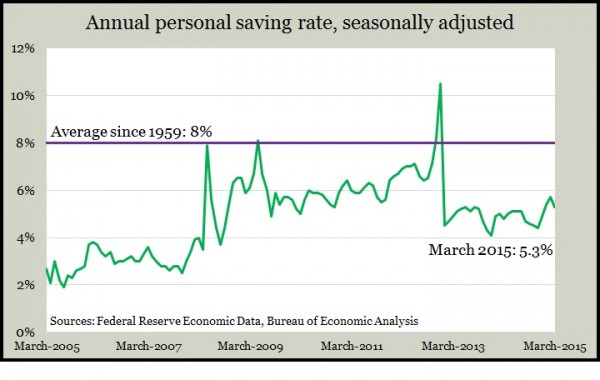 The ISM Manufacturing Index suggested the industry continued expanding for the 28th month in a row in April. The index reading was 51.5, unchanged from March and weaker than the post-recession peak of 58.1 in August. New orders, production and imports grew fasters while employment slowed and exports started expanding again after contracting in March.

The University Michigan reported that its monthly consumer sentiment survey reached its second highest mark since 20007 in April, a sign that an uptick in spending may be nearing. Consumers expressed greater optimism based both on how conditions seem now and on expectations for the immediate future. An economist with the survey credited low interest rates, low inflation and confidence in job prospects.