The non-manufacturing sector continued to expand in February for the 97th consecutive month. The ISM non-manufacturing index slowed to a reading of 59.5 after an exceptionally strong reading in January. Components measuring business activity, new orders and export orders grew faster in February, but hiring slowed. The Institute for Supply Management said its index level is consistent with an annual growth rate of 3.9% for the U.S. gross domestic product.

The Commerce Department reported that factory orders declined in January for the first time in six months, led by a drop in commercial aircraft orders. Excluding volatile orders for transportation equipment, demand rose 0.4% for the month and was up 8.4% year-to-year. A proxy for business investments, which has been lagging for months, fell for the second month in a row but was up 8.1% from January 2017.

The U.S. trade deficit widened 5% to $56.6 billion in January, the biggest trade gap in nearly 10 years, according to the Bureau of Economic Analysis. Exports fell 1.3%, led by a drop in commercial aircraft sales, while imports were unchanged. Among imports, a rise in oil prices was offset by declines in prices for consumer goods, including cellphones.

The Bureau of Labor Statistics reported that productivity was unchanged between the third and fourth quarters of 2017. An initial estimate had shown the annual rate of productivity actually declined in the last three months of the year. Sluggish productivity has been an ongoing concern since the recovery from the Great Recession. Productivity is key to maintaining the standard of living and raising wages, which fuels economic growth. For all of 2017, productivity increased 1.2% – vs. a 2.1% average since 1947, a level that hasn’t been reached since 2010. 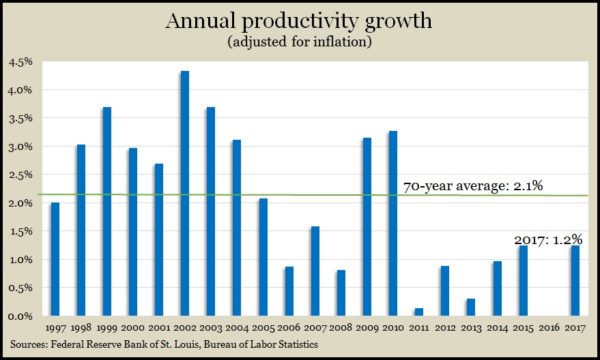 The Federal Reserve reported that growth in credit card debt slowed in January, suggesting that Americans were less comfortable about spending. So-called revolving credit expanded by $0.7 billion from December, an annual rate of 0.8%, down from 7.2% in December and 13.4% in November. The bulk of consumer credit – non-revolving credit, including student loans and automotive financing – rose by $40 billion or an annual rate of 5.6%.

The moving four-week average of initial unemployment claims rose for the first time in three weeks, following its lowest point since 1969. Jobless applications were 37% below the 50-year average, according to the Labor Department, and continued to point to a persistent reluctance among employers to let workers go. Demand for workers should build pressure for higher wages and increased consumer spending, which drives about 70% of U.S. economic activity.

U.S. employers added 313,000 jobs in February, 29% above the three-month average. Employers added 54,000 more jobs in January and December than previously estimated. February marked the 89th consecutive month of job gains. Average wages rose 2.6% from February 2017, less than analysts expected, and the wage gain in January was lowered to 2.8%, suggesting inflation might be less of an immediate concern. The unemployment remained at 4.1% for the fifth month in a row, the lowest in 17 years. Most of the data from the Bureau of Labor Statistics signaled continued strong hiring markets.

The level of wholesale inventories rose 0.8% in January, as sales sank 1.1%. As a result, the Commerce Department reported, the ratio of inventories to sales rose markedly. Companies had been trying to bring that ratio down to better align supply and demand. The ratio climbed to a post-recession peak in January 2016. At the same time, a build in inventories helps boost the GDP.