A higher-than-expected jump in non-manufacturing activity in February suggested the biggest part of the U.S. economy expanded for the 43rd month in a row. The Institute for Supply Management reported accelerating growth in business activity, new orders and export orders, and while hiring slowed, it remained relatively brisk. Purchase managers surveyed by the trade group expressed increasing optimism about business conditions and economic trends.

The Commerce Department said factory orders fell in January, largely because of a drop in orders for commercial aircraft. But aside from the volatile transportation orders, requests rose for manufacturing products, led by construction equipment. A proxy for business investments increased the most in more than eight years.

Revised data from the Bureau of Labor Statistics showed labor productivity dropping more than analysts had expected at the end of 2012. Economists suggested it may be a temporary setback as employers added workers, who were still getting up to speed. On an annual rate, hourly compensation for the fourth quarter outpaced hourly labor output, resulting in the fastest pace of lost productivity in four years. 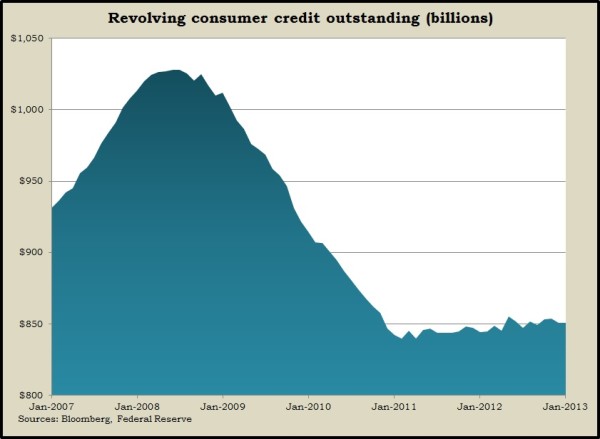 The moving four-week average for initial unemployment claims fell for the third time in five weeks, setting a new low for the economic recovery. Data from the Labor Department showed average claims at the lowest point in five years, a further indication that employers are laying off fewer workers.

Employers added more jobs than expected in February, with notable gains in construction, manufacturing, health care, professional services and other service industries. Private payrolls expanded for the 36th month in a row, according to the Bureau of Labor Statistics. The unemployment rate fell to 7.7%, its lowest point since December 2008.