Both personal income and personal spending rose  in January, the Bureau of Economic Analysis reported. And both grew more than analysts expected. One-time factors may have muddled the data a bit for trend readers. For instance, colder-than-usual weather in some parts of the country boosted consumer spending on utility bills, and the expiration of extended unemployment insurance benefits were offset by increases in some government cost-of-living raises. A key measure of inflation suggested the economy continues to grow slower than Fed Reserve policy makers would prefer.

The Institute for Supply Management said manufacturing activity expanded in February for the ninth month in a row, and at a pace that beat analyst forecasts. New orders experienced a big jump from January, and purchase managers said despite some weather-related setbacks, they feel optimistic about near-term demand and growth.

In a reminder that housing recovery continues to contribute to U.S. economic expansion, the Commerce Department reported that construction spending grew 0.1% in January and 9.3% since January 2013. The growth exceeded expectations, owing to a monthly gain of 0.9% for residential spending, which increased by 9.3% from the previous year. Government spending on construction declined.

Weather woes didn’t dent motor vehicle sales much in February, according to Autodata Corp. In fact, dealers’ annual rate of sales rose slightly to 15.3 million vehicles, although analysts anticipated even more. Pent-up demand since the economic downturn has been fueling car sales in recent years. 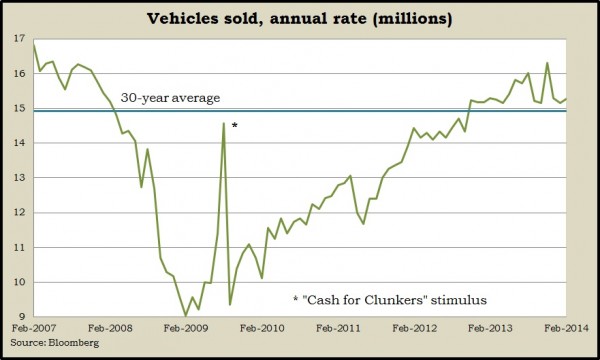 The ISM said non-manufacturing activity slowed a bit in February, but the biggest part of the U.S. economy expanded for the 49th month in a row. New orders rose at a faster pace, but hiring contracted for the first time in 25 months. Purchase managers surveyed by the trade group expressed caution about business conditions and economic trends. Of 18 industries represented, eight reported contracting activity, with some blaming the weather and healthcare changes.

The Commerce Department said factory orders fell in January, largely because of a drop in orders for commercial aircraft and automobiles. But aside from the volatile transportation orders, requests rose slightly, suggesting a slowdown in manufacturing activity. One consolation was that a proxy for business investments increased.

Revised data from the Bureau of Labor Statistics showed labor productivity rose less than previously estimated and less than analysts had expected at the end of 2013. Productivity advanced at an annual rate of 1.8% in the fourth quarter, down from a previous report of 3.2%. The lower gain suggests tighter prospects for employee pay raises. Unit labor costs fell at an annual rate of 0.1% and recorded the first year-to-year loss in four quarters.

The moving four-week average for initial unemployment claims fell for the first time in six weeks but remained below the 47-year average. Data from the Labor Department showed average claims staying at a level that suggests employers are relatively reluctant to let workers go.

Amid speculation over the role severe winter weather has played in hiring, employers added more jobs than expected in February. The pace of hiring picked up from recent months but remained below the average for the last year. Private payrolls expanded to within a hair of their pre-recession peak, according to the Bureau of Labor Statistics. Government jobs fell on a year-to-year basis for the 56th month in a row. The unemployment rate rose slightly to 6.7%.

The U.S. trade gap widened slightly in February, exceeding analyst expectations. Both imports and exports grew by 0.6% from January. Trade surpluses increased with Hong Kong and Singapore, while deficits grew with China, OPEC and Canada.