The Institute for Supply Management said its manufacturing index declined in February, though it still indicated slow growth for the sector for the second month in a row. Based on surveys of purchasing managers, the index showed demand for manufactured goods shrinking, along with reduced hiring, inventories and imports. The trade group said the index suggested the U.S. gross domestic product is growing at an annual pace of 2.1%.

In a sign of continued consumer spending, the annual rate of motor vehicle sales slowed only slightly in February but kept pace with the 12-month average. Data from the Bureau of Economic Analysis shows an annual sales pace of 16.8 million cars and light trucks in February, down 0.5% from January and up 1.9% from February 2019. Light trucks, including SUVs, continued to dominate sales, outselling cars by nearly 3-to-1.

The non-manufacturing sector continued to expand in February for the 121st consecutive month. The ISM non-manufacturing index accelerated its pace of growth for the third month in a row, reaching its highest level in a year. Although expressing concerns about work shortages and possible effects of the new coronavirus outbreak, purchasing managers surveyed by the Institute for Supply Management remained positive about current business conditions and the overall economy.

The four-week moving average of initial unemployment claims rose for the second week in a row and the third time in four weeks. Jobless applications were 39% below the 53-year average, which hasn’t been crossed in more than seven years, according to Labor Department data. Demand for workers should build pressure for higher wages and increased consumer spending, which drives about two-thirds of U.S. economic activity.

The Bureau of Labor Statistics reported that productivity grew at an annual pace of 1.2% in the fourth quarter of 2019, down from an initial estimate of 1.4%. The productivity rate resulted from a 2.4% rise in output and a 1.2% gain in hours worked. For all of 2019, productivity averaged 1.9%, the third consecutive increase and the highest since 2010. 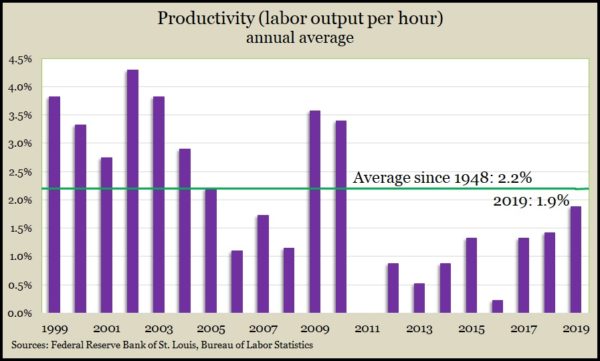 The Commerce Department reported January factory orders declined 0.5%, the second dip in three months, and a greater decrease than analysts expected. Compared to the year before, demand for manufactured goods was unchanged and, after excluding the volatile transportation category, rose 1.4%. A measure that gauges business investments rose 1.3% from January 2019.

U.S. employers added 273,000 jobs in February, exceeding analyst expectations as well as the 178,000 average gain for 2019. February marked the 113th consecutive month of job gains, another record, according to the Bureau of Labor Statistics. Payroll data showed that for the 19th month in a row, average hourly wages rose more than 3% from the year before. In the same report, the bureau said that the unemployment rate dropped to 3.5% from 3.6% in January, hovering at the lowest levels in 50 years.

The U.S. trade deficit narrowed 6.7% to $45.3 billion in January, as both exports and imports declined. The Bureau of Economic Analysis said exports fell 0.4% from December, while imports dropped 1.6%. The three-month moving average, which smooths out the data’s volatility, reached its lowest level since mid-2018.