Further signs of moderate U.S. economic growth showed in higher-than-expected construction spending in January. The Commerce Department reported that such expenditures rose to their highest point since before the Great Recession. Private construction spending also was the most since late 2007. Money spent on residential building rose 7.6% from the year before. Non-residential grew by 12.3% since January 2015, led by roadways, manufacturing and lodging. 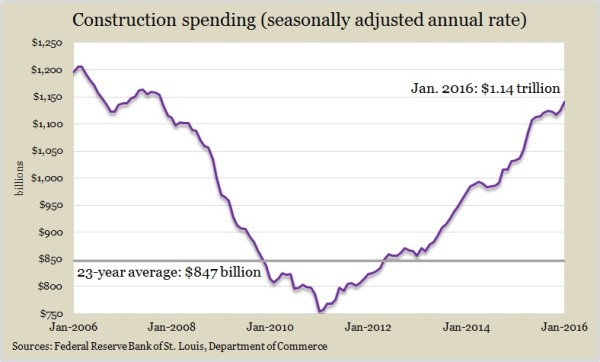 Factory work contracted for the fifth month in a row in February, though at a slower rate and with the second consecutive expansion in new orders. The Institute for Supply Management’s manufacturing index reflects struggles from a slumping global economy and the ripple effects of weak oil prices. Of 18 industries surveyed by the trade group, nine said their businesses are growing.

The pace of motor vehicles sales dipped slightly in February but remained relatively robust at 17.5 million cars and trucks, according to AutoData Corp. The annual rate was up 7% from the year before. Cheap gas continued to drive more buyers to trucks than cars. Strong vehicle sales suggest healthy consumer spending, which is responsible for about two-thirds of U.S. economic growth.

The Federal Reserve Board suggested continued moderate to modest economic growth in its beige book, an anecdotal region-by-region analysis of economic activity. The Fed district based in Kansas City was the lone region to suffer a setback, due to the cutbacks among energy-related concerns in the area. The central bank noted general optimism from business executives it contacted across the country.

More evidence that the weakness in manufacturing could be abating showed in a gain of factory orders in January. Though it’s a volatile indicator, new orders posted their first gain in three months, largely because of requests for commercial aircraft. The Commerce Department reported that except for transportation equipment, orders declined slightly. Preliminary sales for non-defense capital goods excluding aircraft – an indicator of business plans to invest in themselves – rose solidly.

The moving four-week average for initial unemployment claims fell for the fourth week in a row, reaching its lowest point since November. According to data from the Labor Department, new jobless claims have stayed below the 49-year average since early 2013, suggesting that employers have been persistently reluctant to let workers go.

U.S. worker productivity did not decrease as much as initially estimated in the fourth quarter as output actually rose slightly while hours worked increased. The Bureau of Labor Statistics said the annualized rate of productivity fell 2.2% for the last three months of 2015. The annual average productivity advanced 0.7% from 2014, about one-third of the average since World War II. The weakness suggests a need for more hiring and business investment.

The Institute for Supply Management’s non-manufacturing index showed the 73rd consecutive month of expansion in February. Growth for the nation’s largest economic sector slowed a smidgen from January, but business activity quickened its pace. Hiring in the sector contracted. Purchase managers surveyed for the trade group’s report expressed satisfaction with current conditions and some optimism toward the economy overall.

U.S. employers added more jobs in February than analysts had forecast, about 6% more than the three-month average and 30,000 more in December and January than previously estimated. The closely watched report from the Bureau of Labor Statistics showed continued momentum for workers, including another month of 4.9% unemployment. However the average work week and the average hourly wage both declined unexpectedly, suggesting a further delay in the pay hikes that could spur consumer spending.

The gap between U.S. exports and imports widened in January, following a December trade deficit that was even greater than the Bureau of Economic Analysis initially reported. Exports fell 2.1%, declining for the fourth month in a row. Exports sank to their lowest level since 2011 amid a weakened global economy and strong U.S. dollar. Imports contracted by 1.2%, suggesting soft demand for goods from abroad.