Hampered for months by the relative strength of the dollar and slower global economic growth, U.S. manufacturing showed mixed signals in January. The Commerce Department reported durable goods orders rising 1.8% from December – the first increase in three months, led by commercial aircraft. Excluding the volatile transportation equipment category, though, orders declined for the first time in three months. A proxy for business investments also declined after increasing in the three previous months.

The National Association of Realtors said its pending home sales index fell 2.8% in January, declining to the lowest level in a year. The trade group repeated complaints that the inventory of houses for sale continues to lag growing demand, thus driving up prices and affordability issues for would-be homebuyers. Still, the association forecasts sales of 5.6 million houses in 2017, which would be a 2.2% improvement from 2016.

The U.S. economy grew at a 1.9% annual pace in the fourth quarter, slower than analysts expected but unchanged from a preliminary estimate for gross domestic product. The Bureau of Economic Analysis cited a faster rate of consumer spending, which accounts for more than two-thirds of economic activity. Business investments and state and local government spending grew even less than initially estimated, while housing contributed more. For all of 2016, GDP grew 1.6%, below the 2.6% gain in 2015 and the historical average of 3.3%. 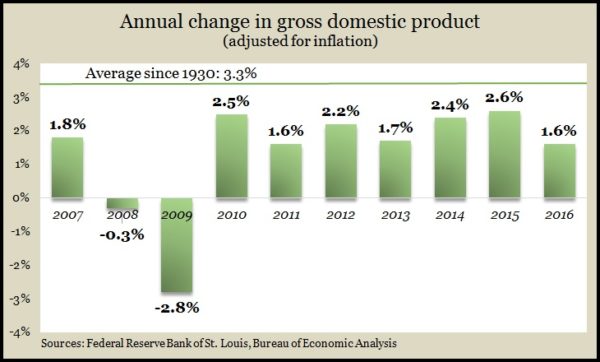 The U.S. housing recovery, as measured by prices, continued in December with the S&P CoreLogic Case-Shiller home price index registering a 5.6% gain from December 2015. All locations in the 20-city composite index had price increases, 12 at wider margins than in November. A housing economist for the index pointed to lack of inventory as a factor in the march up in prices, which continue to outpace broader measures of inflation.

The manufacturing index of the Institute for Supply Management offered a more positive sign of the sector’s recovery, accelerating expansion in February for the sixth month in a row. The index hit its highest mark since August 2014, and 17 of the 18 industries surveyed reported growth. New orders rose at the fastest pace since the end of 2013. Export orders expanded for the 12th month in a row.

Consumer spending rose less than analysts expected in January and actually declined slightly when adjusted for inflation, according to the Bureau of Economic Analysis. Consumer spending grew by 0.2%, half the rate of personal income growth in January, pushing the personal saving rate to 5.5% of disposable income. Adjusting for inflation, spending shrank by 0.3%. The same report showed inflation remaining below the Federal Reserve target of 2%.

A component of the manufacturing sector – and a prominent part of consumer spending, decelerated slightly in February. The annual pace of motor vehicle sales dropped 0.2% to just under 17.6 million vehicles, which was a 0.7% setback from February 2016. Auto dealers sold fewer cars and more trucks, both monthly and year-to-year. Aided by the strong dollar, sales of imports continued to grow faster than domestics, according to figures compiled by Auto Data Corp.

The annual rate of construction spending fell 1% in January, led by a 5% drop in government projects. Just under $1.2 trillion overall, expenditures remained near the 2006 peak and were 3.1% ahead of the pace in January 2016, according to Commerce Department data. Residential spending rose 5.5% from the year before, led by multi-family housing.

The moving four-week average for initial unemployment claims fell to its lowest level since April 1973, dropping 35% below the 50-year average, according to Labor Department data. Persistently low jobless applications suggest an ongoing reluctance by employers to let go of their workers, which should strengthen the hiring market. Employment heavily influences consumer confidence, which spurs the consumer spending that drives economic growth.

The largest major segment of the U.S. economy grew in February at its fastest pace since October 2015, according to the ISM non-manufacturing index. The index reported expansion in the service sectors for the 86th month in a row, with broad participation from 16 of the 18 industries surveyed.