The U.S. housing expansion continued in February, according to new-home sales figures from the Commerce Department. The annual rate of sales declined 4.4% from January, which had been revised to the highest level since May 2007. The February pace of 765,00 houses was up 14.3% from the year before and stayed above the pre-recession level for the ninth month in a row.

Led by demand for cars and trucks, durable goods orders rose 1.2% in February, the fourth increase in five months. Excluding the volatile transportation category, orders declined 0.6%, the Commerce Department reported. Compared to the year before, overall orders gained 0.4% and rose 0.5% excluding transportation. A measure of business investment fell 0.8% from January but was up 1.5% from February 2019.

The four-week moving average for initial unemployment claims rose by a record number, more than quadrupling the average from the week before. The Labor Department cited job displacements related to the COVID-19 virus for a one-week spike in claims of nearly 3.3 million, which was more than four time the previous record in data going back to 1967. Economists suggest the claims undercount employment repercussions from the pandemic because many workers don’t qualify for unemployment insurance. 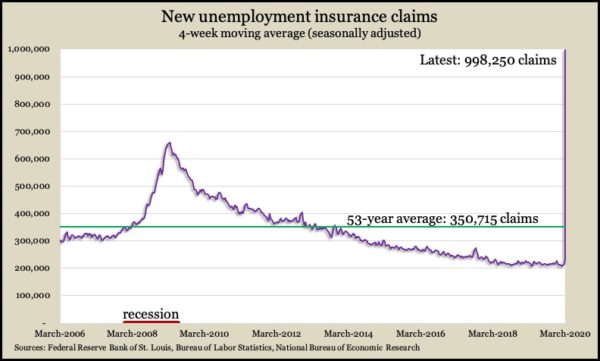 The Bureau of Economic Analysis confirmed earlier estimates that the gross domestic product grew at a 2.1% annual rate in the last three months of 2019. The government upwardly revised consumer spending to a growth rate of 1.8%, which was offset by a greater-than-estimated decline in business investments. The Federal Reserve’s favorite measure of inflation indicated prices still were not growing fast enough to meet the Fed’s target of 2%. For the year, GDP grew 2.3%, the lowest since 2016, when it hit 2%.

By far the biggest driver of the U.S. economy, consumer spending rose a mild 0.2% in February, according to the Bureau of Economic Analysis. Meanwhile, personal income gained 0.6%, raising the personal saving rate to 8.2%, the highest since last March. That was above the average of 7.3% since the Great Recession but short of the 61-year average of 8.8%. The same report showed the Fed’s favorite inflation marker rising 1.8% year to year, eclipsing the 1.6% average since the recession but below the 3.2% average since 1960.

As expected, consumer sentiment took a nosedive in March, experiencing the fourth-largest decline in nearly 50 years of data. Steeper free falls accompanied the 2008 financial collapse, the 1980 recession and Hurricane Katrina, according to the University of Michigan. An economist with the survey said fallout from COVID-19 could send sentiment to the most severe two-month plunge ever. Economists consider sentiment a driving force for consumer spending.