In a sign of the choppy housing recovery, existing home sales slowed in February. The National Association of Realtors said members sold an annual rate of nearly 5.1 million houses, down 7% from January but 2% ahead of the year-ago pace. The trade group blamed a Northeast blizzard and slumping stock prices for the February setback but continued to cite lack of inventory and affordability as challenges. The median sales price rose 4.4% from February 2015, the 48th consecutive increase.

A biennial study on retirement confidence showed again that American workers who have plans for their retirement are more likely to feel secure about their financial future. The 26th report from the Employee Benefit Research Institute delivered mix messages, including survey results showing that Americans collectively are feeling more secure about their retirements while also saving less for it. Another finding from the comprehensive research shows that a higher percentage of workers expect to retire by 65 than the percentage of retirees who actually left the workforce that young. 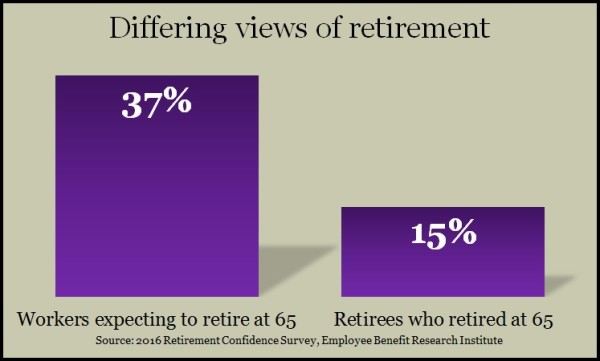 The annual sales rate of new houses rose 2% in February, though it was 6% off from the year-ago pace, the Commerce Department reported. Only Western states increased sales from January, according to the report. The supply of new houses was unchanged from the previous month but grew by 24% from February 2015.

Employers continued hanging on to workers for the most part even as the moving four-week average for initial unemployment claims rose for the first time in seven weeks. The Labor Department released data showing average claims below the 300,000 level for the 55th week in a row, the longest streak since 1973.

The U.S. economy grew at a 1.4% annual rate in the last three months of 2014, down from 2% in the third quarter but up from previous estimates of 0.7% and 1%. In its final estimate of fourth-quarter Gross Domestic Product, the Bureau of Economic Analysis said the rate of consumer spending rose at 2.4%, also brisker than earlier estimates but below the 30-year average of 3%. The report also showed corporate profits before taxes falling the most since the recession, while the Fed’s preferred inflation indicator dropped to 1.1%, further below the 2% target.