Housing recovery continued to lead the news of U.S. economic growth this week. The Commerce Department reported that new housing construction rose in February to the highest rate since July 2008, before the Lehman Brothers debacle. The pace of building permits authorized for future construction also climbed to the highest point in nearly five years. 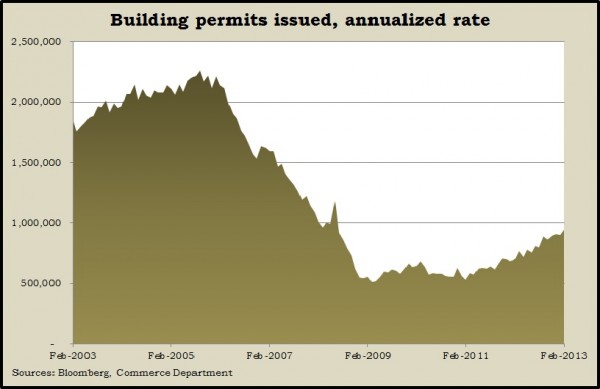 The annual sales rate of existing houses also gained in February, reaching levels not seen in more than three years. The median sales price rose nearly 12% from February 2012, the 12th consecutive year-to-year increase in prices. An economist for the National Association of Realtors said housing values are up $1.4 trillion in the last year and could result in additional consumer spending between $70 billion and $110 billion.

The moving four-week average for initial unemployment claims declined for the fourth week in a row, plunging to a low dating back more than five years. The Labor Department reported data showing average claims below the 45-year average for the 10th week in a row as employers continued to lay off of letting workers go.

The Conference Board’s index for leading economic indicators showed progress for the third month in a row in February, with a majority of categories pointing to further growth. Although the pace of expansion remains slow, signs suggest the economy is gaining resilience, according to an economist for the business research group. Although the latest indicators don’t include effects from federal budget sequestration, the board said stronger growth may arrive in the second half of the year.