With about 70% of the U.S. economy driven by consumer spending, retail sales help measure momentum. The Commerce Department reported that February sales declined 0.5% with nine of 13 categories lower than January. Gas stations, which have been selling at lower prices, led the setback, which included electronics stores, home-and-garden centers and car dealerships. Sales at online retailers rose 1.4%. Year-to-year, retail sales rose 4.3%.

Industrial production continued a comeback in advance of the COVID-19 pandemic, with output rising 0.6% in February, the first gain in three months. The Federal Reserve reported that utilities led the surge in production, recovering from an unseasonably warm January. Factories increased output for the third time in four months after more than a year of struggles against a slowing global economy and uncertainty about trade policies. Capacity utilization, a leading indicator of inflation pressures, rose to 77% from 76.6% in January, remaining below the 48-year average of 79.8%, which hasn’t been reached since mid-2008.

The Bureau of Labor Statistics said job openings grew 6.3% in January to nearly 7 million positions, a sign that 2020 started with continued strong demand for workers. The gain was the first since October and down from a peak of 7.5 million openings 12 months earlier. The figures still represented historically tight labor conditions, which should encourage consumer spending. Employers hired 69.9 million workers in 2019, up 1.9% from 2018 and the 10th consecutive increase. Both the number and proportion of workers quitting their jobs rose to record highs in 2019, a sign of employee confidence in being able to find new work. 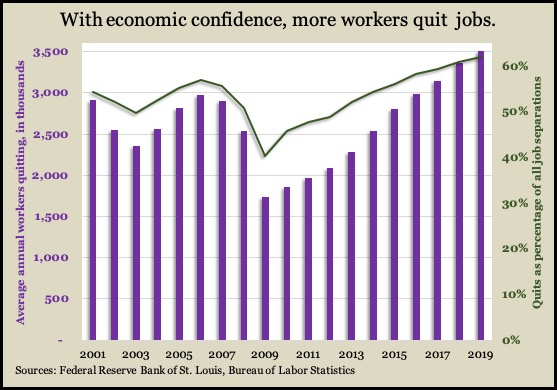 Numbers for housing starts and building permits suggested brighter prospects for the housing industry in February, especially among single-family residences, which would help address concerns of low inventories. The departments of Commerce and Housing and Urban Development said single-family housing starts rose to the highest annual rate since June 2007, remaining above the pre-recession level for the eighth month in a row. Single-family completions topped 1 million for the first time since the recession. Permits authorizing further single-family building topped 1 million for the first time since May 2007.

The four-week moving average for initial unemployment claims rose for the fourth week in a row, gaining 11.4% in that time, as the Labor Department said its data has begun to show repercussions from COVID-19. Weekly claims jumped by more than 30% from the week before. Historically low jobless claims have been a years-long indication of a tight labor market that encouraged consumer spending.

The index of leading economic indicators rose 0.1% in February, after a 0.7% gain in January and a 0.3% setback in December. The Conference Board cautioned that its longstanding index did not yet reflect consequences from the novel coronavirus and likely included short-lived positive signs such as a rebound in manufacturing. “Declines in stock prices, consumers’ outlook on economic conditions, manufacturing new orders, average workweek in manufacturing, and rising unemployment claims will begin to negatively impact the economy,” the business research group reported. “As a result, the economy may already be entering into a period of contraction.”

Sales of existing houses grew 6.5% from January for the fastest February pace since 2007,  according to the National Association of Realtors. The seasonally adjusted annual rate of 5.77 million houses sold in February was 7.2% ahead of the year-ago pace, the 96th straight year-to-year gain. An economist for the trade group cited low mortgage rates and pent-up demand for the surge but warned of the unpredictability of fallout from COVID-19.