Industrial production in the U.S. gained in February for the first time in three months, the Federal Reserve reported. However, manufacturing and mining output both contracted with only utilities increasing production as parts of the country dealt with severe winter weather. The Fed also said capacity utilization declined for the third month in a row, possibly reflecting domestic effects from the global slowdown. The capacity level further separated from the long-term average, indicating weaker pressure for inflation.

The housing recovery, also affected by the weather, showed more signs of choppy progress in February with the pace of new housing construction dropping 17% and down 3.3% from February 2014. Single-family housing starts increased slightly from the year before with multi-family showing a greater decline, according to the Commerce Department. A higher-than-expected boost in building permit applications was led by multi-family units, suggesting increased housing starts in coming months. 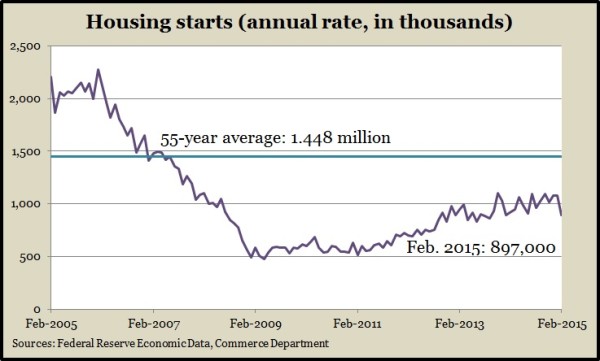 At the end of its regularly scheduled two-day meeting in Washington, the Federal Reserve policy committee announced that it’s not likely to raise short-term interest rates at its next meeting in April. Citing an apparent moderation in U.S. economic growth, the Federal Open Market Committee said it will continue to monitor progress in the labor market as well as inflation before determining when to raise rates, perhaps as early as June.

The moving four-week average for initial unemployment claims rose for the third time in four weeks. The Labor Department reported data showing average claims have stayed below the 48-year average for more than 110 weeks in a row, a sign that employers are reluctant to lay off workers.

The Conference Board’s index of leading economic indicators rose less than analysts expected in February. Economists for the business research group said economic drag from weakening industrial output and diminishing business investment could mean more moderate growth ahead for the U.S. economy. But for now, the expansion continues with fairly broad gains.