The housing expansion slowed down in January as sales of new residences declined 7.8% from the pace in December. The annual rate of 593,000 houses sold was down 1% from January 2017, according to the Commerce Department. The supply of new houses for sale rose nearly 11% from the month before and 17% from the same time last year, which could help sustain housing’s comeback, which has been hampered by low inventories. New home sales only recently surpassed their pre-recession levels.

Tight supply continued to keep home prices rising much faster than inflation overall in December. The S&P/Case-Shiller home price index rose to 6.3% year-to-year growth for the 20-city composite index, down from 6.4% in November. A housing economist for Standard & Poor’s noted that since the financial collapse in 2008, home prices have risen 62%. He said higher mortgage rates could start slowing demand, which would help moderate the escalation in prices.

The Conference Board said its February consumer confidence index hit its highest mark since November 2000. Components covering both current conditions and near-term prospects. Confidence from the labor market overcame volatility in stocks to fuel optimism for the economy and for personal finances.

A key measure of manufacturing, durable goods orders, declined in January for the first time in three months. Commercial aircraft led the downdraft, but excluding the volatile transportation category, orders were off only slightly from December, according to the Commerce Department. Year-to-year, durable goods orders rose about 9%, aided by a weaker dollar, which helps sales by lowering the cost of American-made goods abroad.

The U.S. economy grew at a 2.5% annual rate in the fourth quarter, slightly below an initial estimate of 2.6% and down from the 3.2% growth rate in the third quarter. The Bureau of Economic Analysis said the slower pace in gross domestic product came from slower inventory buildup and a wider trade deficit. Full-year GDP growth reversed two years of decline but remained below the long-term average. Consumer spending stayed strong at a 3.8% annual rate. The Federal Reserve’s favorite measure of inflation rose at a 1.9% rate and 1.5% for the full year. The Fed’s target rate is 2%. 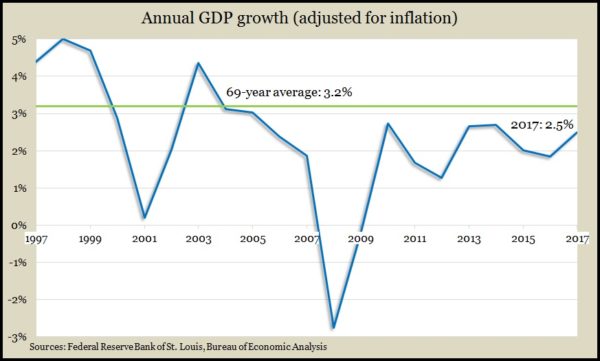 Pending contracts for existing house sales dropped 4.7% in January, the decline in four months, falling to the lowest level in three years, according to the National Association of Realtors. The trade association blamed rising mortgage rates and short supply for pushing prices beyond the reach of more would-be buyers. Still, the association forecasts selling 5.5 million houses in 2018, which would be slightly less than 2017.

The moving four-week average for initial unemployment claims sank to its lowest level since the end of 1969. Job losses remained 38% lower than the 51-average, according to Labor Department data, indicating an extended reluctance by employers to let go of their workers. Economists say the tight labor market has been fueling the confidence that should lead to further consumer spending, which is the chief driver of U.S. economic growth.

Consumer spending rose 0.2% in January, which was half the pace of income growth for the month, according to the Bureau of Economic Analysis. In addition, new federal legislation helped drop personal taxes by 3.3%, and personal savings climbed to 3.2% of disposable income, the highest level since August. The latest monthly measure of the Fed’s preferred inflation gauge was 1.5% rate for the fourth month in a row.

The annual rate of construction spending was unchanged in January, staying above the pre-recession high-water mark for the 16th consecutive month, according to the Commerce Department. Residential construction spending – in particular, expenditure on single-family houses – rose for both the month and the previous 12 months, while multi-family housing and non-residential investments declined.

The manufacturing index of the Institute for Supply Management rose to its highest level in 14 years. Components for new orders and production slowed but remained at a relatively high rate. The trade group said its index indicated industry expansion for the 18th month in a row and that based on past performance of the index and GDP, the economy was growing at an annual pace of 5.4%.

U.S. sales of motor vehicles declined in February for the third month in a row. Dealers sold the annual equivalent of 17.1 million vehicles, down 0.5% from January and 2.2% off the year-ago pace. Total sales were the slowest in five months and just below the 12-month average, according to Autodata Corp. Sales of imported trucks rose 4.6% from January and 6.8% from February 2017.

The University of Michigan consumer sentiment index rose to its second highest level since 2004, in part because consumers are expecting to benefit from federal tax legislation. The semi-monthly survey suggested optimism over tax reform and the job market overshadowed concerns about interest rates and stock market volatility. A university economist forecast consumer spending to grow 2.9% in 2018.