A month after federal payments to households boosted consumer spending sharply, retail sales receded 3% in February. A report by the Commerce Department showed overall spending at stores was still 6.3% ahead of where it was the year before, after which sales dropped off dramatically because of the COVID-19 pandemic. The only place sales rose in February was at gas stations, where prices have been increasing. Retail spending accounts for about two-thirds of consumer spending, which drives about two-thirds of U.S. economic output. Although retail sales overall rose from the year before, bars and restaurants continued to struggle while online shopping has increased. 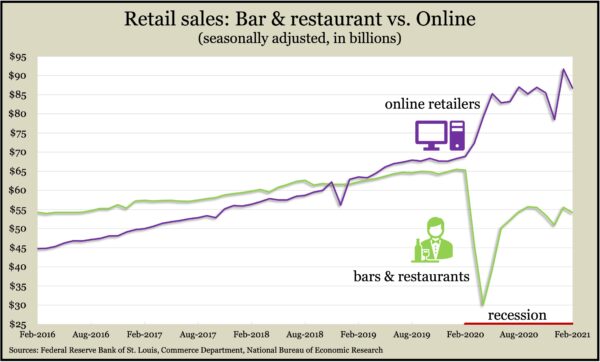 Extraordinary winter storms in the South hit U.S. industrial output in February, setting back total production 2.2%, the first decline in five months, according to the Federal Reserve. Manufacturing output fell 3.1% from January, including a 14.5% drop-off for chemical materials production, largely based in the South. The Fed said even excluding weather effects, industrial production would still be behind its level before the pandemic. Capacity utilization fell to 72.3%, only the second monthly decline since hitting a record low of 64.2% last April. Lower capacity usage suggests less pressure for inflation. The capacity rate hasn’t hit the long-term average of 79.6% in nearly 13 years.

Despite a slower pace in both housing starts and building permits in February, a joint report from the departments of Commerce and Housing and Urban Development suggested continued progress for the housing industry. Overall, new residential construction remained near 14-year highs, although a bit lower than recent peaks. The pace of houses under construction as well as those just completed remained elevated, which offered encouragement amid longstanding signs of housing shortages.

The four-week moving average for initial unemployment claims fell for the sixth week in a row, dipping below 750,000 new applications for the first time since Thanksgiving. According to Labor Department data, the level continued to decline from a record of nearly 5.8 million average claims in April but remained more than double the 55-year average and well above the pre-pandemic high. More than 18 million Americans were receiving jobless benefits in the latest week, compared to 2.1 million at the same time last year.

The Conference Board’s index of leading economic indicators rose 0.2% in February, suggesting continued momentum for the U.S. economy. The pace was down from 0.5% in January and 0.4% in December. The business research group noted that an acceleration in vaccinations and additional stimulus payments were not fully captured yet in the indicators. It cited winter storms as causes of possibly transitory setbacks in a couple of indicators, including factory hours, building permits and consumer optimism.  The Conference Board forecast 5.5% economic growth in 2021.