The broadest measure of inflation suggested relatively steady though low overall price increases. The Consumer Price Index gained 0.1% in February with rising costs for food and shelter offsetting a dip in energy prices. Year-to-year, the CPI increased 2.3%, led by energy costs, shelter and medical care, the Bureau of Labor Statistics reported. Excluding volatile food and energy items, the core CPI indicated a 12-month inflation rate of 2.4%, down from four months at 2.3%. Precautions against the COVID-19 virus are expected to dampen the global economy and lower inflation. 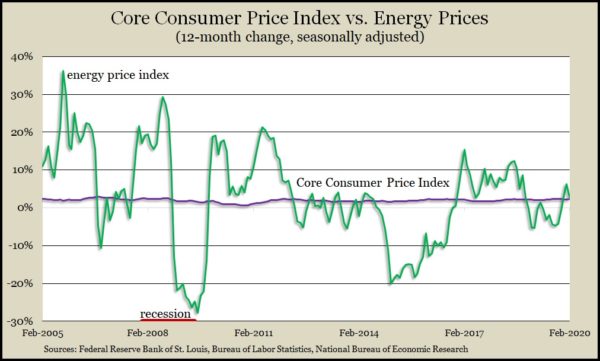 Mostly because of a 3.6% drop in energy prices, wholesale inflation declined 0.6% in February, according to the Bureau of Labor Statistics. But even excluding food, energy and trade services, the core Producer Price Index shrank for the first time since June. Year-to-year, the overall Producer Price Index rose 1.3% while the core rate was up 1.4%.

The four-week moving average for initial unemployment claims rose for the third week in a row and the fourth time in five months, though it’s still hovering around 50-year lows. Data from the Labor Department showed jobless claims 39% below the 53-year average. The low level suggests reluctance by employers to let go of their workers in a tight employment market.

A preliminary reading of consumer sentiment for March showed fallen expectations for the near-term economy because of the COVID-19 pandemic. University of Michigan surveyors said the spread of the novel coronavirus and the sell-off on Wall Street dampened consumers’ outlook for the year. Expectations for the next five years rose from February, suggesting consumers see the virus as a short-term setback. A Michigan economist said sentiments will likely sink further as repercussions of the disease widen. Sentiment is considered a leading indicator of consumer spending, which drives about 70% of U.S. business activity.