Wholesalers built up inventories more than analysts expected in January, but sales sank, signaling an imbalance between supply and demand. The Commerce Department said the inventories-to-sales ratio rose to its highest point since just after the Great Recession. Typically, when supplies are rising faster than demand, companies need to slow production or even cut back.

U.S. employers had 5 million job openings in January the most in 14 years, according to the Bureau of Labor Statistics. Although the number of hires dipped from December, employees quitting their jobs totaled the highest number since before the 2008 financial collapse. Quitting is a positive sign of how confident employees are that they can find a better job in the employment market. 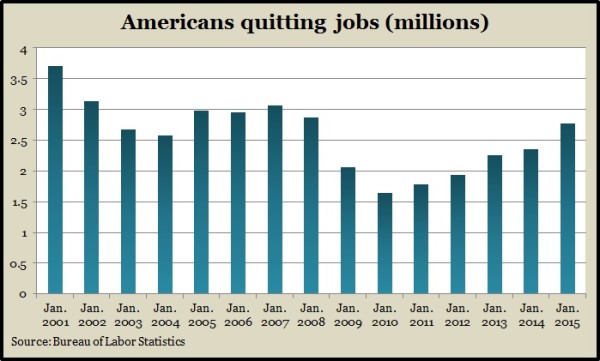 A chief indicator of consumer spending, retail sales, surprised analysts by falling in February. The Commerce Department reported that eight of 13 sales categories declined from January, although weather-related factors could be clouding the bigger picture for some categories, such as automotive. Despite signs of rising disposable income from lower oil prices and relatively strong consumer confidence, shoppers appear reserved. Consumer spending drives 70% of the nation’s economic activity. Year-to-year retail sales were up 1.7% vs. a long-term average of about 4.5%.

As with the wholesale report Tuesday, business inventories outpaced demand in January, according to the Commerce Department. The inventories-to-sales ratio reached its highest level since mid-2009. Weather may be a short-term factor for a 2% sales decline.

The moving four-week average for initial unemployment claims fell for the first time in three weeks, the Labor Department reported. The level dipped below 300,000 for the first time since September and stayed lower than the 48-year average, signaling an ongoing reluctance by employers to let workers go.

The Producer Price Index declined in February for the fourth month in a row and the sixth time in seven months, according to the Bureau of Labor Statistics. Energy prices were unchanged after dropping eight months in a row.  The year-to-year wholesale inflation rate declined for the first time in data going back to 2009, providing further evidence that inflation is no threat, and the Federal Reserve can afford to show restraint in raising interest rates.

A preliminary read of consumer sentiment suggests more concerns about spending money, especially among households in the lower two-thirds of income, according to the University of Michigan and Thomson Reuters. Even so, economists connected with the twice-monthly survey forecast a 3.3% rise in consumer spending in 2015.