With consumer spending accounting for more than two-thirds of the U.S. gross domestic product, analysts have been encouraged by months of rises in consumer credit. Much of the increase has been from growing debts from auto financing and student loans. But a key sign for analysts has been revolving debt from credit cards, which can indicate that consumers are more willing to spend when they don’t have cash on hand. The Federal Reserve reported that outstanding credit card debt decreased in January for the first time in 11 months. 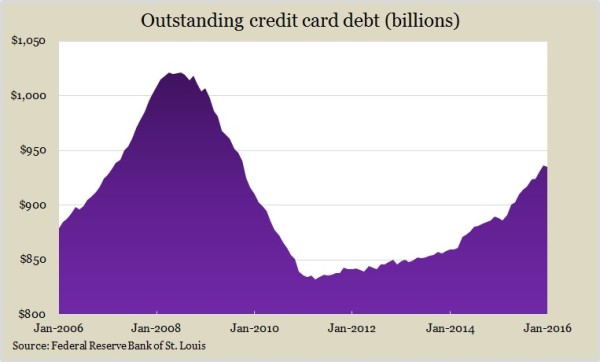 Generally, increased inventories are a positive indicator of the confidence businesses have in selling their products. But lately, that confidence has outpaced sales, which concerns some economists that upcoming production and hiring could be curtailed. The Commerce Department said wholesale inventories rose 0.3% in January vs. a 1.3% drop in sales. That sent the ratio between inventories and sales to its highest mark since the Great Recession.

The moving four-week average of initial unemployment claims fell for the fifth week in a row to the lowest since November, not far from its 42-year low set in October. A persistent lack of jobless applications suggests the hiring market remains robust, which should eventually lead to the wage increases that embolden consumers to step up their spending. Based on Labor Department data, jobless claims have been below the 48-year average every week for more than three years.