The Commerce Department offered further signs that the housing recovery may be waning. The annual rate of housing starts fell 11.2% in December to the lowest level since September 2016. Single-family starts—which account for 70% of all new housing—dropped to the lowest since August 2016. Wild fires in California might have played a role in the slowdown, but building permits—an indicator of future construction—declined to their lowest level for single-family houses in four months. 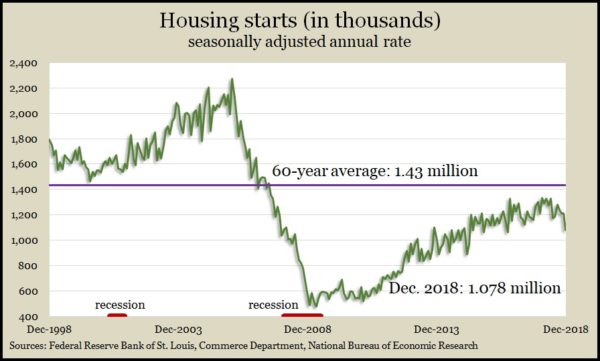 Price increases for houses also continued to slip in December, according to the S&P CoreLogic Case-Shiller home price index. Year-to-year price growth for the 20-city composite index fell to 4.2% from 4.6% in November and from 6.3% in December 2017. Despite the slowdown in housing inflation, it continues to outpace gains both for inflation more broadly and for average wages. The 20-city composite index was 58.8% above its 2012 trough and 3.1% above the peak in 2006.

The Conference Board said its February consumer confidence index rose for the first time in four months. Optimism grew both for current conditions and near-term prospects. The business research group said expectations gained from higher stock market prices and the end of the federal government shutdown. Economists see consumer confidence as a precursor to increased consumer spending. Based on the index, the Conference Board said, the U.S. should continue growing but at a slower pace.

Pending contracts for existing house sales rose 4.6% in January, higher than analysts expected and a rebound from a 2.3% decline in December, according to the National Association of Realtors. The trade association credited lower mortgage rates and rises in incomes and inventories for increased activity. Year-to-year, though, contract signings fell 2.3%, the 13th consecutive setback. Realtors expect to sell 5.28 million houses in 2019, which would be 1.1% lower than in 2018.

The four-week moving average for initial unemployment claims declined for the first time in five weeks, showing recovery from the 35-day partial shutdown of the federal government. Job losses remained 35% lower than the 52-year average, according to Labor Department data, indicating an extended reluctance by employers to let go of their workers. Economists say the tight labor market has been fueling the confidence that should lead to further consumer spending.

The U.S. economy grew at a 2.6% annual rate in the fourth quarter, higher than expected, but below paces of 3.4% and 4.2% in the previous quarters. The Bureau of Economic Analysis attributed the slower pace in gross domestic product to weaker housing investments, lower federal government spending and a bigger trade deficit, among other factors. Consumer spending, which accounts for about two-thirds of U.S. economic activity, slowed to an annual pace 2.8% in the last four months of the year, vs. 3.5% in the third quarter. The Federal Reserve’s favorite measure of inflation rose at a 1.7% rate in the fourth quarter and 1.9% for the full year. The Fed’s target rate is 2%.

Consumer spending fell 0.5% in December while personal income rose 1%, according to the Bureau of Economic Analysis. Data-gathering interruptions from the government shutdown resulted in the delayed report on December as well as an incomplete report for January, which showed only that income fell in January by 0.1%. Based on the December figures, the personal saving rate shot up to 7.6%. The monthly measure of the Fed’s preferred inflation gauge was 1.9% for December, unchanged from November.

The manufacturing index of the Institute for Supply Management fell to its lowest level since November 2016, indicating slower growth in the 30th consecutive month of expansion for the sector. The trade group said that all but one of the 18 industries it surveyed reported contraction in February and that based on past performance of the index, the economy was growing at an annual pace of 3.3%.

The University of Michigan consumer sentiment index slipped from a mid-month estimate to still increase from its January level. Consumers continue to have historically low expectations for inflation, a university economist said, and expectations for inflation-adjusted income are near their peaks in the ‘80s and ‘90s. The economist forecast consumer spending to rise 2.6% in 2019, which should spur the U.S. expansion that began in mid-2009 to become the longest ever.