Further evidence of America’s housing recovery turned up in the S&P/Case Shiller home price index, which showed year-to-year house prices improving in January for the 12th consecutive month. Among the 20 cities surveyed, only New York had lower prices than January 2012. The 6.8% 12-month increase in the composite index was the highest since July 2006. A housing economist with Standard & Poor’s said housing led the economy in the last quarter of 2012, but he cautioned that the momentum could be slowing.

The Conference Board reported that consumer confidence in February rose to its highest level in three months, which beat analyst expectations. The business research group said consumers were recovering from fears of the “fiscal cliff” and adjusting their attitudes toward current conditions as well as future prospects. Still, more consumers expect decreases in income in the next six months than those who anticipate raises.

New home sales in January rose to the highest annual rate since July 2008, the Commerce Department said. The sales rate exceeded expectations as the result of low mortgage rates, pent-up demand and a relatively short supply of available houses. The median sales price gained 2.1% from the year before, which could help consumers feel more confident about their finances. Although housing continues to rebound, sales are still a fraction of the level before the recession hit at the end of 2007. 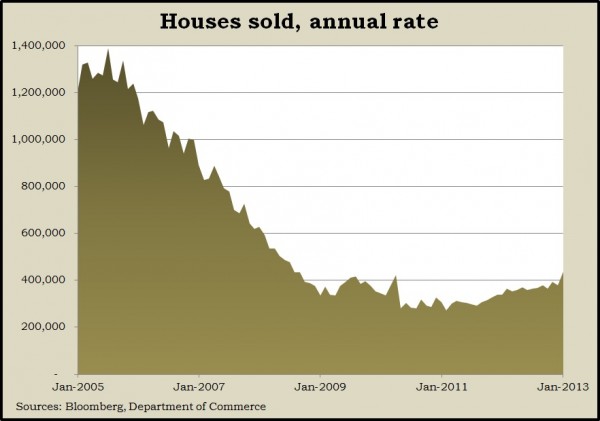 Aside from the volatile commercial airlines category, January orders for durable goods rose more than expected, gaining for the fifth month in a row and at the widest margin in more than a year. The Commerce Department said civilian capital goods orders, an indicator of business investments, also rose by the highest percent in more than a year, suggesting continuing momentum for manufacturing.

Employers continued to be reluctant to let workers go as the moving four-week average for initial unemployment claims dropped for the first time in three weeks but remained near the low point for the recovery. The Labor Department reported that the average stayed about where it had been five years ago.

The economy barely grew the last three months of 2012, which is an improvement over the slight decline initially estimated in the Gross Domestic Product. The Bureau of Economic Analysis said its second look at the GDP showed a 0.1% gain in the fourth quarter, vs. its earlier report of a 0.1% contraction. That follows a 3.1% annual growth rate in the third quarter, which is average for the last 50 years. Among the factors holding back the reading is a cut in government spending, including a 22% annual rate of military cutbacks. Consumer spending, which drives 70% of economic growth, rose 2.1% in the latest quarter, shy of the 50-year average of 3.3%.

Personal income shrank in January as payroll tax cuts expired and also after companies paid out more dividends in December to avoid other tax breaks that ended as part of the fiscal cliff settlements. Even so, the Bureau of Economic Analysis said personal spending gained a moderate 0.2% in January. And the Federal Reserve’s favorite measure of inflation dipped for the third month in a row to an annual rate of 1.3%, suggesting that runaway higher prices are not an imminent threat.

The February manufacturing index from the Institute for Supply Management showed stronger growth than analysts had expected. While hiring appeared to be slowing, momentum gained significantly for new orders and production. The report indicated that manufacturing is reviving from the global economic slowdown last year.

The Commerce Department said construction spending fell in January, especially for non-residential and public projects. Spending on residential construction continued to grow, reflecting further strength in the housing industry. Americans spent 3.6% more on single-family home construction in January and 30% more than in January 2012.

Consumer sentiment toward current financial conditions as well as future prospects rose higher than expected in February, according to the University of Michigan and Thomson Reuters. Considered a leading indicator of consumer spending, the sentiment index advanced for the third month in a row to its highest level since November.