An ongoing concern since the U.S. recovery from the Great Recession is sluggish labor productivity, which continued in the first quarter. The Bureau of Labor Statistics reported that productivity was unchanged in the first three months. That was an improvement from an initial estimate that productivity had declined 0.6% on an annual rate. Productivity is key to maintaining the standard of living and raising wages, which fuels economic growth. Year-to-year, productivity increased 1.2% – vs. a 2.1% average since 1947.

A hoped-for comeback in manufacturing received a setback as factory orders decreased in April for the first time in five months. Commercial aircraft led the decline, according to the Commerce Department, although non-transportation orders eked out a monthly gain and remained 5.5% ahead of the year-ago pace. A proxy for business investments rose but remained near recessionary levels. Some economists say greater business investment could help the moribund labor productivity. 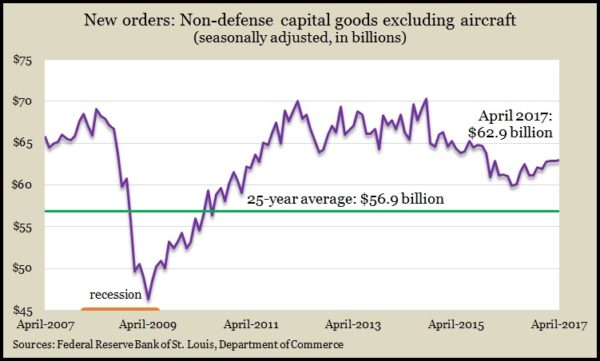 The larger non-manufacturing sector continued to expand in May. The ISM non-manufacturing index declined slightly from April but stayed above its 12-month average and signaled the 89th consecutive month of growth for service industries. The Institute for Supply Management said the index suggests that the overall economy is growing at a 3.1% annual rate.

The gulf between job openings and employees hired widened in April as employer demand grew to a record high, according to the Bureau of Labor Statistics. More than 6 million jobs were advertised in April, the most in 16 years of data. Only in the last couple of years have openings outpaced the level of new hires each month, and in April the difference between the two exceeded 900,000. The gap suggests employers need to invest more in labor-saving technology, increase training or raise wages to attract the workers they need. 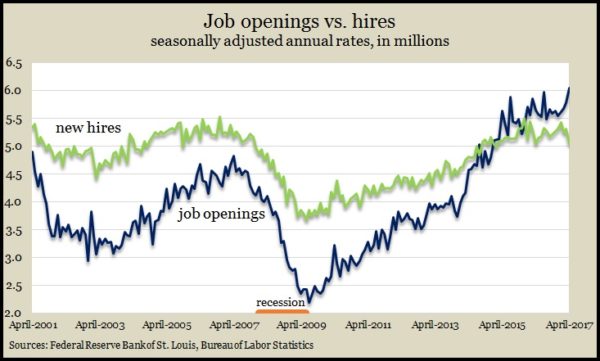 The Federal Reserve reported that growth in credit card debt slowed in April, suggesting that Americans were more hesitant about spending. So-called revolving credit expanded by $1.5 billion from March, less than one-third of the previous month’s gain. Consumer spending drives about 70% of U.S. economic activity. The bulk of consumer credit – non-revolving credit, including student loans and automotive financing – expanded at the lowest rate in six years.

The moving four-week average of initial unemployment claims rose for the second week in a row and the fourth time in six weeks. Still, new jobless applications remain 32% below the 50-year average, according to the Labor Department. A persistently low level of claims suggests employers remain reluctant to let workers go, which should build pressure for higher wages and increased consumer spending.

The level wholesale inventories declined in April for the first time in four months slightly faster than sales fell. The Commerce Department reported that the ratio of inventories to sales remained unchanged for the fourth month in a row, leveling off at about the ratio reached at the end of the Great Recession. Companies have been trying to bring that ratio down to better align supply and demand so they can operate more leanly. The ratio climbed to a post-recession peak in January 2016.