U.S. employers had a record number of job openings in April, another reminder of the tight labor market. For the first time since the Bureau of Labor Statistics began such reports in 2000, the number of openings exceeded the number of Americans who are unemployed. Of course, not everyone who is unemployed would qualify for all of the openings, but the comparison helps illustrate the supply of and demand for workers. 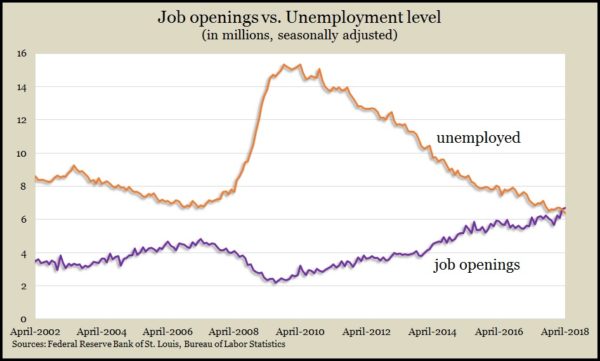 The non-manufacturing sector of the U.S. economy continued to expand in May for the 100th consecutive month. The ISM non-manufacturing index accelerated to a reading of 58.6, exceeding the 12-month average, which includes a 13-year high in January. Components measuring business activity, new orders and hiring grew faster in May. The Institute for Supply Management said the index level is consistent with an annual growth rate of 3.5% for the U.S. gross domestic product.

The U.S. trade deficit narrowed 2.1% to $46.2 billion in April, the slimmest gap in seven months, according to the Bureau of Economic Analysis. Exports rose 0.3% to a record high. Imports declined 0.2% with less money spent on cellphones, consumer electronics and cars made abroad.

The Bureau of Labor Statistics reported that worker productivity rose 0.4% between the last quarter of 2017 and the first quarter of 2018. An initial estimate had shown the annual rate of productivity growing 0.7% in that period. Sluggish productivity has been an ongoing concern since the recovery from the Great Recession. Productivity is key to maintaining the standard of living and raising wages, which fuels economic growth. Since 1947, productivity has risen an average 2.1% per year, a level that hasn’t been reached since 2010. The same report showed unit labor costs rising at a 2.9% annual rate in the first quarter but only 1.3% over the preceding four quarters.

The four-week moving average of initial unemployment claims rose for the third week in a row, following its lowest point since 1969. Jobless applications were 36% below the 51-year average, according to the Labor Department, and continued to point to a persistent reluctance among employers to let workers go. Demand for workers should build pressure for higher wages and increased consumer spending, which drives about 70% of U.S. economic activity.

The Federal Reserve reported that growth in credit card debt rebounded in April, although it has remained relatively flat since finally overcoming the recession peak in November. So-called revolving credit suggests consumer confidence in spending. It expanded by $2.3 billion from March, an annual rate of 2.6%. The bulk of consumer credit – non-revolving credit, including student loans and automotive financing – rose by $7 billion or an annual rate of 3%.

The level of wholesale inventories rose 0.1% in April, as sales increased 0.8%. As a result, the Commerce Department reported, the ratio of inventories to sales declined and now is just above its 26-year average. While a build-up in inventories helps boost the GDP, keeping them in line with sales shows a balance between supply and demand and suggests how well companies are positioned to respond to sudden shifts in orders. After reaching all-time highs during the recession, the inventories-to-sales ratio has been above its historical average all but two months since December 2014.