Factory orders dropped in April for the third time in four months, which may be a sign that global economic growth is slowing. The Commerce Department reported that year-to-year orders remained up at a relatively healthy rate of 6.5%, but the monthly trend warrants watching. Factory shipments fell for the first time in 11 months.

The Institute for Supply Management said its non-manufacturing index for May signaled the 29th consecutive month of expansion for the nation’s largest economic sector. Companies surveyed expressed optimism about business conditions and the direction of the economy. Unlike the manufacturing sector, non-manufacturing is showing signs of accelerated growth. 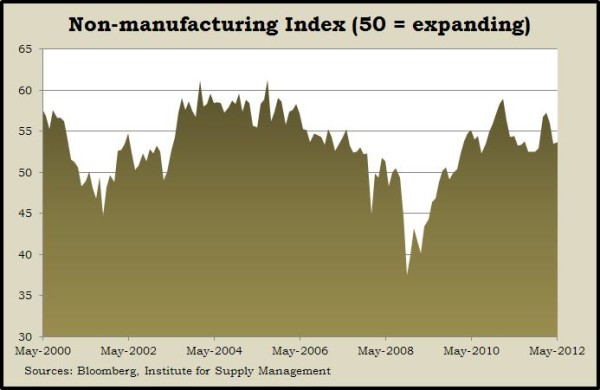 The productivity of American workers declined more than initially estimated in the first quarter of 2011, according to the Labor Department. That could indicate the need to hire more workers. At the same time, labor costs rose less than earlier reported, with compensation actually dipping when adjusted for inflation. Pay squeezes could challenge consumer spending, which accounts for 70% of economic activity.

The Federal Reserve’s beige book reported “moderate” economic expansion based on regional anecdotal reports of business and consumer activity in April and May. Among the bright spots were observations of continued growth in manufacturing and signs of vitality in the beleaguered housing industry.

Student loans again contributed to rising consumer credit in April, according to the Federal Reserve. Outstanding credit increased by $6.5 billion from March, the smallest monthly gain since October. Non-revolving credit, which includes student debt and car financing, rose 7.1% in April while revolving debt from credit cards shrunk by 4.8%. 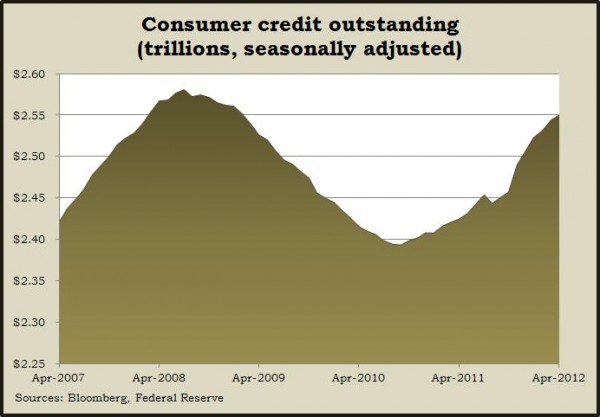 The moving four-week average for initial unemployment claims rose for the second week in a row, underscoring ongoing concern about the sustainability of moderate progress in the U.S. labor market. Despite the recent gains, Labor Department data showed jobless claims 43% lower than the height of the recession. Ever since October, the average has been below 400,000 claims, which many economists consider a crucial point for employment growth.

The U.S. trade deficit shrunk for the second time in four months in April reflecting lower oil prices and perhaps a slowdown in global economic growth. Exports declined 0.8% from March. Imports dipped 1.7%. Both indicators rose significantly in March. The trade gap between the U.S. and China grew in April while narrowing with Germany and the European Union.