In a possible reflection of global economic trends, the Institute for Supply Management reported slower growth in its manufacturing index in May. The index hit its lowest level since October 2016 and declined for the second month in a row. Despite the slowdown, the monthly measure based on purchasing manager surveys indicated the 33rd consecutive month of expansion for the internationally sensitive sector.

The Commerce Department said the pace of construction spending declined minimally in April. Compared to April 2018, money spent on building projects fell 1.2% to an annual rate of nearly $1.3 trillion, the second year-to-year dip in three months. Residential construction spending declined for both the month and the year, let by single-family housing.

U.S. motor vehicle sales rose to an annual pace of 17.3 million vehicles in May, up 5.9% from the April rate and up 0.7% from May 2018. Data from the Bureau of Economic Analysis show imported trucks leading the monthly increase with U.S.-made trucks advancing the most year-to-year. The sales pace of domestic trucks reached the highest level since July 2005. 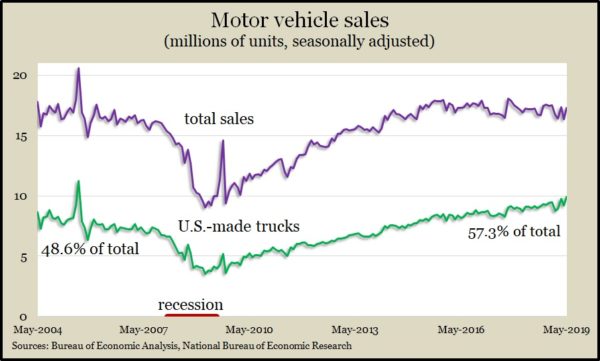 In another sign of manufacturing weakness, factory orders fell 0.8% in April, down for the second time in three months. Requests for aircraft and autos led the decline, according to Commerce Department data. Excluding transportation equipment, orders rose 0.3% for the month and a modest 1.4% from April 2018. A measure of business investment dropped 1.2% from March but was up 2.6% from April 2018.

The non-manufacturing sector continued to expand in May for the 112th consecutive month. The ISM non-manufacturing index quickened its pace with components measuring new orders, business activity and employment all growing faster. Purchase managers surveyed by the Institute for Supply Management expressed optimism overall for business conditions and the economy but showed concerns about tariffs and tight labor conditions.

The U.S. trade deficit narrowed 2.1% to $50.8 billion in April, the Bureau of Economic Analysis reported. Both exports and imports fell 2.2% from March. For exports, it was the biggest decline since January 2016. Compared to April 2018, the trade gap widened by 2%.

The four-week moving average of initial unemployment claims fell for the third week in a row, continuing to hover around 1969 levels. Jobless applications were 39% below the 52-year average, which hasn’t been crossed in more than six years, according to Labor Department data. Demand for workers should build pressure for higher wages and increased consumer spending, which drives about two-thirds of U.S. economic activity.

The Bureau of Labor Statistics reported that productivity grew at an annual pace of 3.4% in the first quarter, down from an initial estimate of 3.6%. Year-to-year, productivity increased by 2.4%, the highest since the third quarter of 2010, resulting from a 3.9% rise in output and a 1.5% gain in hours worked. In the last year, unit-labor costs fell 0.8%, the lowest since the fourth quarter of 2013.

U.S. employers added 75,000 jobs in May, below analyst expectations and a fraction of the 151,000 three-month average and the 223,000 average from 2018. Hiring weakened broadly across industries. Even so, February marked the 104th consecutive month of job gains, another record, according to the Bureau of Labor Statistics. Payroll data showed that for the eighth month in a row average hourly wages rose more than 3% from the year before, although at the lowest rate since September. In the same report, the bureau said that the unemployment rate stayed at 3.6%, the lowest level in nearly 50 years.

The Commerce Department said wholesale inventories rose again in April, outpacing sales and furthering the distance between supply and demand. Compared to April 2018, inventories rose 7.6%, vs. a 2.7% increase in sales.

The Federal Reserve reported that growth in credit card debt rebounded in April, suggesting that Americans were more comfortable spending. So-called revolving credit expanded at an annual pace of 7.9%, up from a 2.3% decline in March. The bulk of consumer credit—non-revolving credit, including student loans and vehicle financing—rose by an annual rate of 4.2%, down from 5.2% in March.