Construction spending gained in April after declining in March, but the Commerce Department reported less of a rebound than analysts expected. Residential spending fell slightly from March but was up more than 18% from April 2012.

Manufacturing contracted in May for the first time since November and only the second time since the recession ended nearly three years ago. Surveys by the Institute for Supply Management showed new orders, production, backlogs and inventories all contracting. Business managers reported flat or slackened demand.

The automotive industry reported more motor vehicle sales in May than analysts had forecast, accelerating the annual rate of vehicles sold to 15.3 million, the highest since February. Imported trucks drove the gain in May, but in the previous 12 months, domestic car sales rose the most.

The U.S. trade deficit widened in April, although not as much as analysts had anticipated. The Bureau of Economic Analysis said imports increased at twice the pace of exports, suggesting more confidence from domestic consumers and businesses and slowing demand abroad for American-made goods.

Demand for commercial aircraft helped lift factory orders in April, following a deep drop in March. The Commerce Department said orders overall declined, aside from the volatile transportation sector. That could be more evidence that a slump is underway in manufacturing.

The Institute for Supply Management said its non-manufacturing index for May signaled the 41st consecutive month of expansion for the nation’s largest sector. Companies surveyed expressed optimism about business conditions but uncertainty about the direction of the economy.

The productivity of American workers rose less than expected in the first quarter, which could help convince employers to hire more workers to boost output. The Bureau of Labor Statistics released figures showing that while productivity gained, the annual rate of hourly compensation fell by the largest margin in 63 years. As a result, labor costs dropped, suggesting that inflation is not an imminent threat.

The Federal Reserve’s beige book reported signs of modest to moderate economic expansion based on anecdotal reports of business and consumer activity. Among the bright spots were observations of growth in manufacturing in most Fed districts as well as gains in housing activity, consumer spending and automotive sales.

The moving four-week average for initial unemployment claims rose for the fourth week in a row, although levels of job loss remain about where they were five years ago, before the financial collapse. The moving average – which smooths out weekly volatility – has stayed below the critical 400,000-claims mark for 26 weeks. 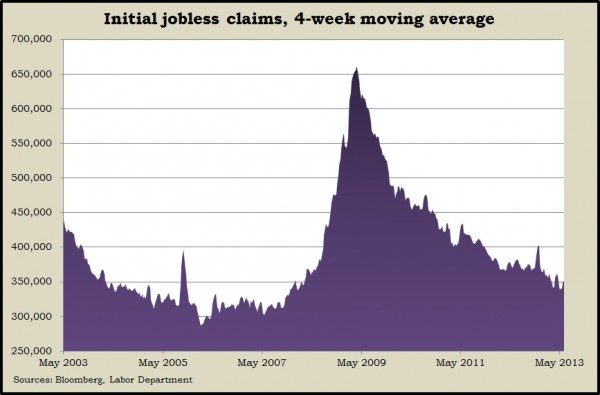 Employers added 175,000 jobs in May, more than expected and above the monthly pace of the past year. Data from the Bureau of Labor Statistics showed payroll counts continuing to grow, though still 2.4 million jobs short of the pre-recession peak. The unemployment rate rose slightly to 7.6% as apparently more job seekers entered the market. Monetary policy makers at the Federal Reserve have set a target rate of 6.5% unemployment.