The annual rate of construction spending gained in April, the third month in a row, but contributed to signs that building is moderating. The Commerce Department reported less of a rebound than analysts expected, and the gain was led by public construction, mainly schools, roads and sewage structures. In residential construction spending, multi-family housing outpaced single-family.

Manufacturing expanded in May for the 18th consecutive month, with new orders, production and pricing components growing at a faster pace. Surveys by the Institute for Supply Management showed purchasing managers reporting steady business, with some expressing growth-related concerns for supply levels and pricing.

Another indication that manufacturing is strengthening is the third consecutive month of factory order gains in April. The Commerce Department said orders reached a new high with increased demand for both durable and non-durable goods and notable boosts for computers and construction materials.

The automotive industry had a faster pace of motor vehicle sales in May than any time since February 2007. The surge, reported by Auto Data Corp., could be part of a pent-up demand for new cars following the harsh winter, but it also suggests a revival in consumer spending, which drives two-thirds of U.S. economic growth.

The U.S. trade deficit widened in April to its biggest gap in two years. The Bureau of Economic Analysis said imports increased 1.2% from March while exports declined 0.2%. The deficit exceeded analyst expectations but could be another sign of stronger domestic spending both by consumers and businesses.

The Institute for Supply Management said its non-manufacturing index rose in May for the third month in a row to the highest level in August, which was a seven-year high. Production, new orders and employment all grew faster. Back orders were expanding again after contracting in April. Purchase manager comments showed optimism for steady, incremental growth.

The productivity of American workers fell in the first quarter, which analysts credited to extraordinarily harsh winter weather. Worker’s hours increased by a 2.2% annual rate in the first three months, while their output fell 1.1%, according to the Bureau of Labor Statistics.

The moving four-week average for initial unemployment claims fell for the fourth week in a row to the lowest point since a seven-year low in September. Job losses remain beneath the long-term average, according to Labor Department data, suggesting an extended reluctance by employers to let go of their workers.

Employers added 217,000 jobs in May, more than expected and above the monthly pace of the past year. Data from the Bureau of Labor Statistics showed payroll counts surpassing the Jan. 2008 level for the first time, nearly five years after the recession officially ended. The unemployment rate stayed at a 2008 low of 6.3%, and several indicators suggested hiring might be hitting a stride. 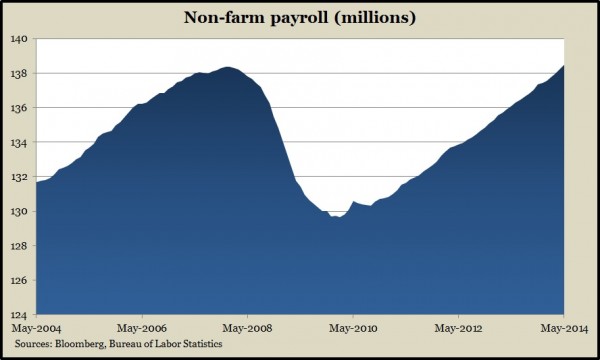