Despite windfalls from lower gas prices, consumers continue to spend less than expected, thus holding back economic growth. The Bureau of Economic Analysis reported no change in consumer spending in April, even as personal income grew 0.4%. As a result, the personal saving rate rose to 5.6% of disposable income from 5.2% in March. The same report showed inflation remains below the Federal Reserve target of 2%. 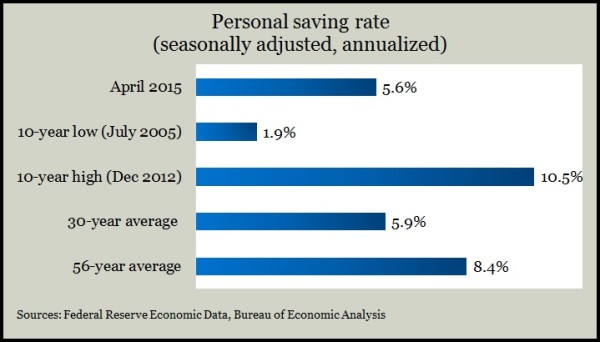 The annual rate of construction spending gained in April, building on a bigger-than-reported increase in March. Both single-family and multi-family housing construction grew in April, according to the Commerce Department. State and local road builders also contributed to the spending increase.

The manufacturing index of the Institute for Supply Management rose in May for the first time since October, marking 29 consecutive months of expansion for that sector. New orders, employment, inventories and backlogs all grew at a faster pace, and purchase managers expressed optimism for manufacturing, mingled with concerns about the strong dollar and the fallout from weaker revenue for the oil and gas industries. 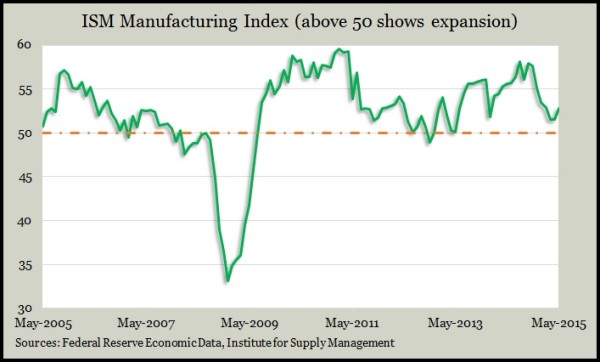 As opposed to the rise in the May manufacturing index, factory orders in April fell for the eighth time in nine months. The Commerce Department report revised earlier estimates so the outlook for durable goods looked bleaker amid the weak global economy and strong dollar.

The automotive industry had a faster pace of motor vehicle sales in May than any time since July 2005. The surge, reported by Auto Data Corp., could be part of a pent-up demand for new cars following the harsh winter, but it also hints at a revival in consumer spending, which drives two-thirds of U.S. economic growth.

The Institute for Supply Management said its May non-manufacturing index signaled the 64th consecutive month of expansion for those industries. However, the growth slowed from April, reaching the lowest level in 13 months. Despite the slowdown, supply managers said they were mostly positive about business conditions and expected continued growth.

The productivity of American workers fell 3.1% in the first quarter, which some analysts attributed in part to a harsh winter. Workers’ hours increased by a 1.6% annual rate in the first three months, while their output fell 1.6%, according to the Bureau of Labor Statistics. Compared to the same time last year, productivity barely increased. Year-to-year, labor costs rose 1.8%, suggesting a continued lack of inflation pressure.

The moving four-week average for initial unemployment claims gained for the second week in a row after reaching the lowest point in 15 years. Job losses remained 24% beneath the long-term average, according to Labor Department data, indicating an extended reluctance by employers to let go of their workers.

Employers added 280,000 jobs in May, more than expected and 11% above the monthly pace of the past year. Data from the Bureau of Labor Statistics showed payroll counts accelerating after a slowdown in the prior three months. The unemployment rate edged up to 5.5% but largely because of new job seekers entering the labor market. Average hourly wages rose 2.3% from May 2014, the biggest 12-month increase since 2013. That is still short of the 3% average set in the last U.S. jobs recovery.