New home sales rose 6.7% in May to 689,000 houses, the Commerce Department report. That annualized sales rate was a 14.1% increase from May 2017, suggesting continued activity in the housing market despite rising mortgage rates. The inventory of new houses for sale remained below what economists consider sustainable for the ninth month in a row.

Low housing supply continued to push up home prices in April, according to the S&P CoreLogic Case-Shiller home price index. The 12-month price increase among 20 cities was 6.6%, down from the March pace of 6.7%, but still more than double the general rate of inflation. A housing economist with Standard & Poor’s said a favorable economy and historically moderate mortgage rates also factored into rising prices. As an illustration of how far housing has had to come back from its collapse, he noted that only three of the 20 real estate markets (Dallas, Seattle and Denver) have recovered to their 2006 price peaks when adjusted for inflation.

The Conference Board said consumer confidence stayed relatively elevated in June, despite a slight decline from May. Enthusiasm has softened marginally since reaching an 18-year high in February, which suggests consumers don’t foresee much improvement in the economy in the coming months, according to the business research group. Feelings toward current economic conditions were little changed from May.

Durable goods orders declined for the second month in a row in May, led by lower sales prospects for commercial aircraft and automobiles. Excluding the volatile category of transportation equipment, orders still fell 0.1%. Year-to-year, orders overall gained 9.9%, with an 8.2% rise excluding transportation. A tell-tale indicator for business investment increased 6.8% from May 2017, suggesting a continued lag in spending that some economists have blamed for holding back productivity.

Complaining that low housing inventories are hampering the real estate recovery, the National Association of Realtors said its pending home sales index sank for the second month in a row in May. The index suffered its fifth consecutive year-to-year decline. An economist for the trade group lowered forecasts for 2018 sales to 5.49 million existing houses, which would be 0.4% fewer than in 2017. The Realtors reported that the supply of houses for sale fell below the previous year’s level for the 36th month in a row.

The U.S. economy grew slower than previously estimated in the first quarter. Gross domestic product rose at an annual rate of 2%, the Bureau of Economic Analysis reported, down from its earlier 2.2% estimate but still the strongest start to a year since 2015. Compared to the earlier estimate, inventories, consumer spending and exports weren’t as strong. Consumer spending, which drives about 70% of economic activity, rose at a 0.9% annual pace in the first three months, the slowest quarter in five years. The Federal Reserve Board’s favorite measure of inflation came in at 2.3%, above the target of 2% annual growth.

The four-week moving average for initial unemployment claims rose for the first time in three weeks remaining near the lowest level since late 1969. According to data from the Labor Department, jobless applications have been below the 51-year average every week since early 2013, indicating that employers are cautious about letting workers go. That helps support a stronger job market, which should encourage more consumer spending.

The Bureau of Economic Analysis said personal spending rose just 0.2% in May. Personal income rose o.4%, though, raising the personal saving rate to 3.2% of disposable income, up from 3% in April. Year-to-year, consumer spending rose 2.3% in May, down from a 2.6% pace in April. In the same report, the Federal Reserve’s favorite measure of inflation showed a 2% year-to-year increase, its first time hitting that mark  since April 2012. 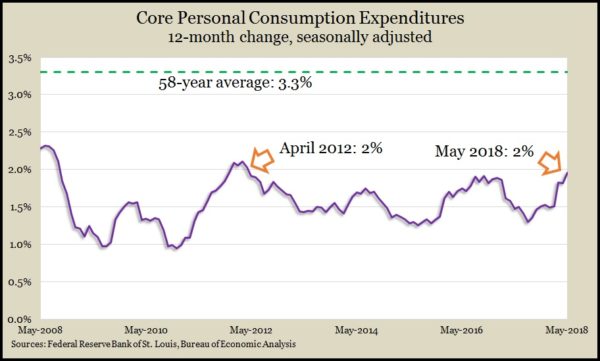 The University of Michigan consumer sentiment index declined from its mid-June estimate but rose a smidge from its May reading. A University of Michigan economist said consumers expressed misgivings about the effects of tariffs on U.S. economic prospects. Still, confidence from jobs and incomes kept overall sentiment relatively high, suggesting continued consumer spending.