Another sign of housing’s possible recovery was a rise in new-home sales in May. The Commerce Department said new houses sold at the fastest rate since April 2010, when homebuyers had to file for a federal tax incentive. Inventories for newly built houses fell, helping to raise the median price 5.4% since May 2011. Even so, the annual rate of sales is about half of the 30-year average.

The year-to-year deficit in house prices shrank in April for the fourth month in a row, according to the S&P/Case-Shiller Home Price Index. The less-bad news added to other data that suggest the worst may be over for the housing malaise. The overall index advanced for the first time since August and showed that prices were still about as low as they were in 2003.

Consumer confidence dropped in June for the fourth straight month, even as feelings improved about current conditions. The Conference Board said expectations dipped amid renewed pessimism over pay raises this year. An economist for the business research group said he sees little change in the slow pace of U.S. expansion.

More housing data showed the sector back up to where it was two years ago. Pending home sales jumped nearly 6% in May and 13% from the year before, according to a National Association of Realtors index. An economist for the trade group said strict lending policies are tightening the supply of houses for sale and could lead to shortages within a couple of years.

A volatile indicator of factory demand – durable goods orders – advanced in May for the first time in three months. Commerce reported that orders for commercial airliners led the May growth and all major categories showed year-to-year gains. Through the first five months, orders for non-defense capital goods, minus aircraft – a key measure of business investment – rose nearly 7% from the year before.

In its final estimate for the first quarter, the Bureau of Economic Analysis said Gross Domestic Product grew at an annual rate of 1.9% to begin the year. The pace slowed from 3% in late 2011 and was below the 30-year average rate of 2.9%. Consumer spending – which accounts for 70% of GDP – grew by 2.5% in the first quarter. That was the fastest rate in more than a year but lower than the previous estimate of 2.7%. 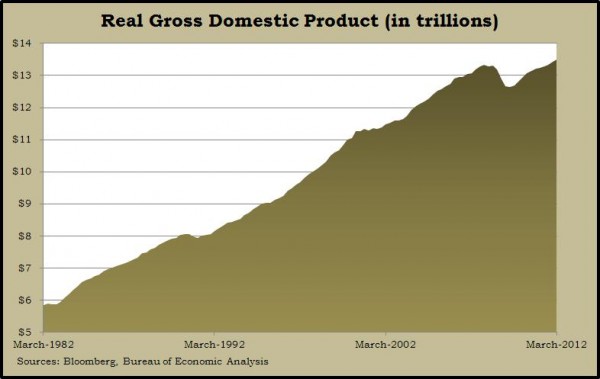 The moving four-week average for initial unemployment claims dipped for the first time in five weeks, providing a slight positive sign at the end of what may be another rough month for jobs. New jobless claims are down 9% from a year ago and down 41% from the recession peak, but they have been floating up lately to levels last reached in December.

Held back by lack of pay raises, personal spending was unchanged in May. The Bureau of Economic Analysis also revised April spending downward as consumers shelled out less for gasoline. Wages and salaries showed no growth in May for the first time in six months. Personal savings, however, increased to 3.9% of disposable income from 3.7% in April. Also in the report, a key inflation gauge rose 1.8% from the year before, the lowest rate so far this year and within the Federal Reserve’s target range.

Consumer sentiment fell for the first time in 10 months, according to the June index from the University of Michigan and Thomson Reuters. Optimism among consumers surveyed stayed above the year-ago mark but bounced to its lowest level since December. A University of Michigan economist said higher-income consumers are curtailing spending plans until they know more about what Congress is going to do about debt-ceiling and tax-cut decisions due at the end of the year.