A bright spot of the U.S. economy has been the housing sector, which in April posted the biggest year-to-year gain in house prices since March 2006, according to the S&P/Case-Shiller Home Price Index. Each of the 20 cities in the composite index has improved home prices for four months in a row. A Standard & Poor’s economist said the housing recovery is broad and strong and will continue despite Federal Reserve signals of rising interest rates.

Another sign of housing’s recovery came from new-home sales in May, which rose for the third month in a row to the highest annual rate since July 2008. The Commerce Department said new houses sold at a 29% faster rate than in May 2012. In the same period, the median price of a new house jumped 10.3%.

Consumer confidence, considered a harbinger of spending, climbed more than analysts expected in June to the highest level in seven years. Feelings toward both current conditions and the future improved, the Conference Board reported. An economist for the business research group said recent trends suggest confidence may pick up moderately in the months ahead and is unlikely to slow.

A volatile indicator of factory demand – durable goods orders – advanced in May for the second month in a row. The Commerce Department reported that orders for commercial airliners led the May growth, but that broad gains spread among most categories. Orders for non-defense capital goods, minus aircraft – a key measure of business investment – rose for the third month in a row, which hadn’t happened since 2011.

In its final estimate for the first quarter, the Bureau of Economic Analysis said Gross Domestic Product grew at an annual rate of 1.8% to begin the year. The pace fell from an earlier estimate of 2.4% and was below the 50-year average rate of 3%, but it exceeded the 0.4% crawl at the end of 2012. Consumer spending – which accounts for 70% of GDP – grew by 2.6% in the first quarter, again slower than previously estimated, but it was the briskest pace in eight quarters. Still, it fell short of the 50-year average growth rate of 3.3%.

Pay grew more than expected in May after rising more than previously estimated in April, which helped personal spending bounce back. That’s key because consumer expenses account for 70% of national economic activity. The Bureau of Economic Analysis also reported that personal savings increased to 3.2% of disposable income from 3% in April. Also, a key inflation rate remained flat at a 1.1% annual rate, the lowest in 53 years of data and well below the Federal Reserve’s target of 2%. 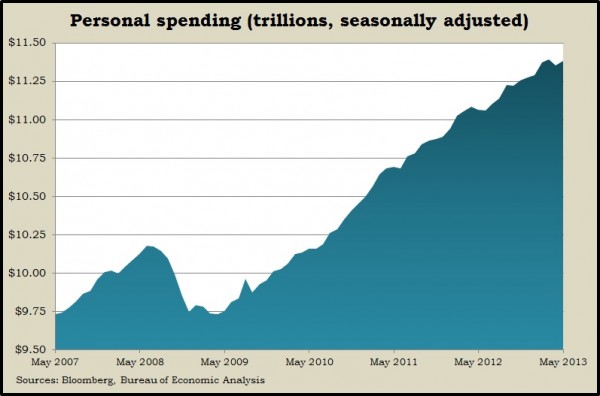 More housing data showed the sector’s resurgence. Pending home sales jumped 6% in May and 12% from the year before – the 25th consecutive month of year-to-year improvement. In fact, the National Association of Realtors said its pending sales index reached its highest mark since December 2006.

The moving four-week average for initial unemployment claims dipped for the second time in three weeks, remaining at 2008 levels and below historic averages. Lack of movement among jobless claims suggests employers are still slow to fire workers, although hiring has been weak for some time.

Consumer sentiment grew during June but still ended slightly lower than the recovery high set in May, according to the University of Michigan and Thomson Reuters. Optimism about the longer-term outlook particularly picked up in June, an indicator that consumers may be more inclined to increase their purchasing.