Although the housing recovery appears to have peaked in 2013, low interest rates and pent-up demand continues to fuel residential investments. For instance, existing home sales rose to an annual rate of 4.9 million houses in May, according to the National Association of Realtors. That was the highest level since October and more than analysts expected. Still, it was 7% lower than the 30-year average pace.

Another sign of housing’s diminished recovery was new-home sales in May, which rose for the third month in a row to 504,000, the highest annual rate since April 2008 – before the financial collapse. The Commerce Department said new houses sold at a 17% faster rate than in May 2013. Again, though, the latest sales are a fraction of previous levels, especially leading up to the housing boom. 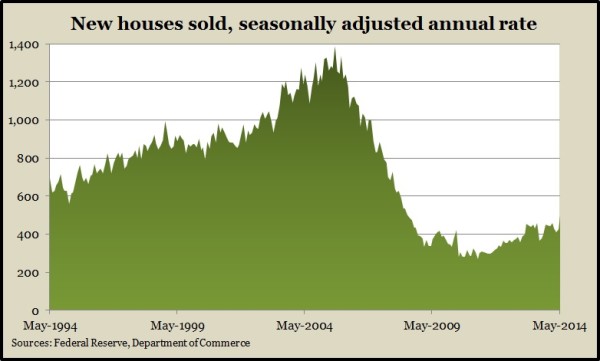 Yet another housing indicator showed the year-to-year gain in housing prices continuing to decline. According to the S&P/Case-Shiller Home Price Index, the 20-city composite price rose 10.8% in the 12 months since April 2013. That’s the fifth monthly decline since a peak of 13.7% in November. A housing economist for Standard & Poor’s suggested the real estate market lacks the first-time home buyers and willing lenders needed to sustain sales beyond the Fed’s plans to eventually raise interest rates.

Consumer confidence, considered a harbinger of spending, climbed more than analysts expected in June to the highest level since January 2008, just as the Great Recession began. Feelings toward both current conditions and the future improved, the Conference Board reported. An economist for the business research group said income expectations were mixed – fewer individuals anticipating pay raises but also fewer expecting cuts. But overall, “quite positive” momentum suggests increased consumer spending may be coming.

In its final estimate for the first quarter, the Bureau of Economic Analysis said Gross Domestic Product sank at an annual rate of 2.9% to begin the year, the steepest setback since the recession. A bigger trade deficit and weaker consumer spending worsened the economic gauge from earlier estimates. Personal consumption – which drives two-thirds of economic activity – rose at an annual rate of 1%, much lower than previously reported. A key measure of inflation fell for the second quarter in a row to 1.2%, well below the Fed goal of 2% as well as the 30-year average of 2.3%.

Pay grew more than spending in May, which pushed up the personal saving rate but disappointed analysts, who more consumer expenditures. On the other hand, the Bureau of Economic Analysis said personal spending did not decline in April, as previously estimated. The Fed’s favorite inflation indicator rose 1.5% since May 2013, still below the Fed’s target.

The moving four-week average for initial unemployment claims rose for the second time in three weeks, still remaining at 2008 levels and below historic averages. Lack of movement among jobless claims suggests employers are still slow to fire workers.

Consumer sentiment grew during June, as Americans said they felt even better about their personal financial situations, according to the University of Michigan and Thomson Reuters. The outlook for the future remained unchanged from May, the survey said. Economists watch consumer sentiment as a harbinger of spending.