with Jason Scuglik and Joel Dresang

The coronavirus pandemic took a toll on existing home sales in May, dropping 9.7% to an annual rate of 3.9 million houses. The sales rate was down 26.6% from the 5.3 million closings in May 2019. The latest rate is the lowest since 2010 and comes after hitting a 13-year high in February. The National Association of Realtors expects the housing market to pick up as stay-at-home restrictions relax. The trade association said the sales pace could beat year-ago comparisons in the second half of 2020.

The Commerce Department reported a 16.6% jump in new home sales in May, reflecting a rebound after three months of decline. At an annual rate of 676,000 houses sold, new homes were about one-sixth of U.S. housing sales in May but contributed much-needed inventory for the market overall. The Commerce figures represent contract signings, as opposed to closings, and suggest a release of pent-up demand in May. The inventory of newly built houses sank to its lowest level in nearly two years.

Declining only marginally, weekly initial unemployment claims remained near 1.5 million, the  Labor Department said. In all, 30.6 million Americans were receiving jobless benefits from one program or another, including $600 weekly supplements that expire in July. The unemployment rate among workers eligible for insurance rose to 13.4%, vs. 1.2% the year before.

The U.S. economy contracted at a 5% annual rate in the first quarter, according to a third estimate of gross domestic product from the Bureau of Economic Analysis. The setback matched the bureau’s second estimate and included a 6.8% rate of decline in consumer spending, which drives about 70% of economic activity. The first quarter included only the first couple of weeks of shutdowns from the pandemic. Some economists are projecting a record plunge of 30% or more for the second quarter.

The Commerce Department said demand for manufacturing revived in May with durable goods orders rising 16.6%. That followed declines of 18.1% in April and 16.7% in March. Compared with May 2019, orders were down 13.6% and at roughly the same level as the end of 2010. Demand for automotive products and military aircraft led the May increase. A proxy measure for business investment rose 4% from April but was down 4% from May 2019.

The lifeblood of the U.S. economy, consumer spending, rose 8.2% in May after falling $2.9 trillion or nearly 20% from its peak in February. The Bureau of Economic Analysis said the seasonally adjusted annual rate of expenditures grew largely from increased spending on motor vehicles and recreational goods and vehicles. Even with the boost, the spending level was about where it was in March 2017. Consumer income fell 4.2% meanwhile as pandemic relief decreased, although unemployment benefits grew. The personal saving rate fell to 23.2% from a record 32.2% in April. The average saving rate since 1959 was 8.9%. 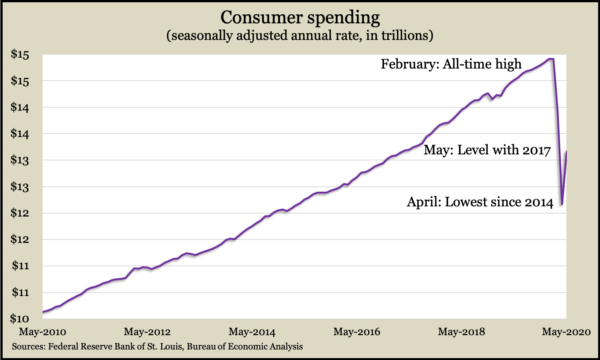 The University of Michigan said consumer sentiment revived in June for the second month in a row with the most notable gains among residents of regions that were slower to reopen from COVID-19 lockdowns. A resurgence of the virus is likely to dampen confidence and curtail spending, according to the report. Additional stimulus could help but  would come as consumers have their lowest opinion of government economic policies since the beginning of 2017.