The beleaguered housing sector showed further signs of survival in May, according to new data from the Commerce Department. New housing construction dipped to a lower-than-expected rate, but the April pace was revised upward to the highest level in more than three years. Building permits, which indicate future plans for housing, rose to the highest point since September 2008. The annual rate of 780,000 permits in May was up 52% from the recession low – but remained behind the average of 1.4 million since 1960. 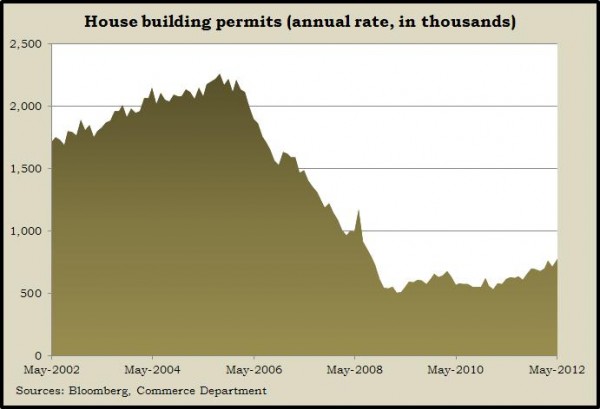 Fewer existing homes sold in May, but the annual sales rate stayed above the year-ago level for the 11th month in a row, and the median sales price rose from the year before for the third consecutive month. The National Association of Realtors reported short supplies of certain houses in some areas of the country, which dampened sales growth but helped boost housing prices. Nationwide, listed inventory dropped 20% from May 2011. Realtors repeated complaints that tight lending rules are holding back sales at a time of record affordability.

The moving four-week average for initial unemployment claims rose for the fourth week in a row to the highest level of the year. Labor Department data suggest summer doldrums for the employment market – one spot of the economy, alongside housing, that has remained most intractable. At the same time, new jobless claims have been bobbing below high-water marks since October.

The Conference Board’s index of leading economic indicators showed more progress in May than analysts had expected. A rise in building permits led the indicators, pushing the index ahead by 0.3% in May. Factory hours, stock prices and consumer expectations dampened growth. The indicators suggest further economic expansion, though at a slow pace. “Continued headwinds, both domestic and foreign, make further strengthening of the economy difficult,” said Ken Goldstein, an economist for the business research group, said,