Housing continued to recover in May, remaining a bright spot in the economy, according to new data from the Commerce Department. The pace of new housing construction rose by nearly 7% from April and almost 29% from May 2012. Building permits, which indicate future plans for housing, dipped for the second time in three months, but the more important single-family housing category rose to the highest pace in five years.

Inflation grew a bit slower than expected in May as the Consumer Price Index gained for the first time in three months. Excluding the volatile food and energy categories, the economy’s broadest measure of inflation advanced 1.7% since May 2012, the Bureau of Labor Statistics reported. By comparison, the Fed target rate for inflation is 2%, and the 30-year average is 2.9%. 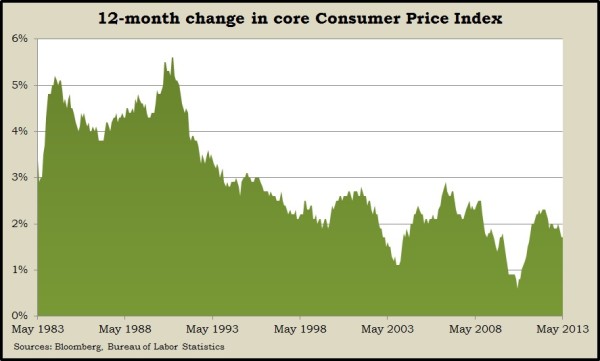 After much anticipation, the Federal Open Markets Committee, led by Federal Reserve Chairman Ben Bernanke, announced that it would maintain its $85 billion-a-month economic stimulus program. In a statement following the committee’s regular meeting, Bernanke said that if the economy keeps growing at a moderate pace, the Fed could begin to taper off on the stimulus later this year, possibly ending it by mid-2014. He also noted that the Fed planned to keep short-term interest rates near 0% at least into 2015.

The National Association of Realtors said existing homes sold at an annual rate of more than 5 million in May. That’s the highest since November 2009 and another sign of housing’s comeback. Economists from the trade group cited an ongoing shortage of houses for sale and reported that the median price jumped more than 15% from May 2012. That’s the 15th month in a row of year-to-year price increases and the sixth in a row of double-digit percentage gains.

The moving four-week average for initial unemployment claims rose for the fifth time in six weeks but was still down 10% from the year before and continued to hover near five-year lows. Labor Department data suggest employers remain reluctant to let workers go but also reserved about increased hiring.

The Conference Board’s index of leading economic indicators rose less than analysts expected in May after a sizable gain in April. An economist for the business research group said the less volatile six-month rate showed “steady” and “resilient” economic growth and suggested the pace would pick up in the second half of the year. Economists said possible hindrances to growth include federal spending cuts and a slowing global economy.