U.S. industrial production weakened in May, with even manufacturing output dipping for the first time in three months. The Federal Reserve reported that capacity utilization declined to its lowest level since January 2014, reflecting a steady drop in recent months of both factory and mining operations. The utilization rate of 78.1% inched farther from the long-term average of 80.1%, suggesting less pressure for inflation, which gives the Fed more leeway for how soon it wants to raise interest rates.

Housing continued to recover in May, with construction starts slowing from their robust pace in April but still 5% higher than the year before. The Commerce Department reported that the annual rate of building permits – a leading indicator of housing starts – rose 25% from May 2014, exceeding analyst expectations and suggesting further housing stock in the pipeline.

The Federal Open Markets Committee, announced that it would continue accommodating fragile economic growth with near-zero short-term interest rates. In a statement following the committee’s regular meeting, the monetary policy making group said the economy continues to make progress but does not yet warrant a return to more normal interest rates. Federal Reserve Chair Janet Yellen said even after the Fed begins to raise rates, it expects to keep them relatively low “for quite some time.”

The broadest measure of inflation, the Consumer Price Index, increased less than expected in May, though it was the largest monthly gain since February 2013. Higher gasoline prices accounted for much of the gain. The year-to-year core inflation rate – which excludes volatile fuel and food prices – reached 1.7%, the Bureau of Labor Statistics reported. Inflation has persistently stayed below the Fed target rate of 2% and is down from the long-term average of 3.8%. 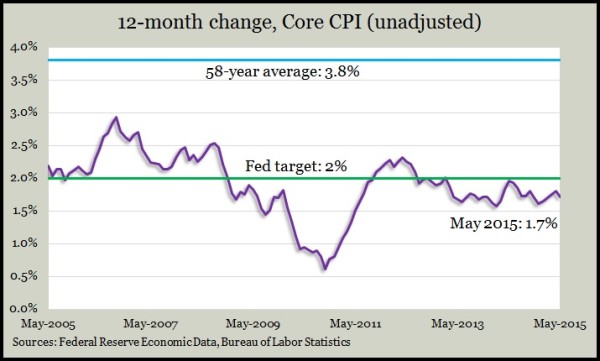 The moving four-week average for initial unemployment claims fell for the first time after sinking to a 15-year low four weeks before. Labor Department data suggest employers remain reluctant to let workers go. Jobless claims have been below their long-term average since the beginning of 2013.

The Conference Board’s index of leading economic indicators rose higher than analysts expected in May, matching the 0.7% increase in April. Signs of strength in building permits, jobless claims and yield spread led the latest increase, suggesting more steady economic growth in the second half of the year after a weak start. The business research group cited struggling manufacturing indicators as a possible headwind for the economy.