The Bureau of Labor Statistics said wholesale inflation was flat in May, after a sizable increase in April. Declines in food and energy costs held back the Producer Price Index, but even excluding those volatile categories, prices fell 0.1% – the first decline in 12 months. Year-to-year, the index rose 2.4% – down from a five-year high of 2.5% in April. Excluding food, energy and trade services, the core rate grew 2.1% from May 2016, near the inflation rate sought by the Federal Reserve Board.

With consumer spending accounting for more than two-thirds of economic output, the Commerce Department’s report on May retail sales showed shoppers retreating letting up after a strong April. Sales fell 0.3%, the second decline in four months. Seven of 13 retail categories reported lower sales, including, car dealers, gas stations and electronics and appliance stores. The gulf between department store sales on online retail revenue continued to widen. Year-to-year, retail sales rose 3.8%, down from the long-term average of 4.3%. 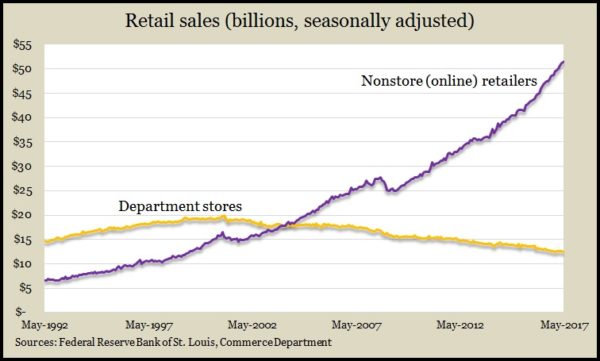 The broadest measure of inflation also suffered a setback in May, according to the Bureau of Labor Statistics. The Consumer Price Index fell 0.1%, the second decline in three months, led by a 6.4% drop in gasoline prices. Excluding the volatile food and energy items, the CPI rose 0.1% for the month and indicated a 12-month inflation rate of 1.7% – the third consecutive decline after hitting a five-year high of 2.7% in February.

In a sign that companies continue to try to keep supplies in closer alignment with demand, business inventories fell 0.3% in May while sales were unchanged. The Commerce Department showed the ratio between inventories and sales staying about where it was two years ago, suggesting companies are in a better position to respond to increased demand with more production and employment.

The moving four-week average for initial unemployment claims rose for the third week in a row, though it continued staying below the 50-year average, as it has every week since the beginning of 2013. Data from the Labor Department showed jobless claims 63% below the recession peak in 2009. The apparent reluctance by employers to let go of their workers suggests a solid employment market, which can fuel consumer confidence and spending.

The Federal Reserve reported that industrial production was unchanged in May following the largest gain in six years. Manufacturing output declined for the second time in three months, particularly affected by falling production of automobiles and business equipment. Capacity utilization, an indicator of inflation prospects, declined for the first time since January to 76.6%, remaining below the 45-year average rate of 79.9%, which was last reached in April 2008. 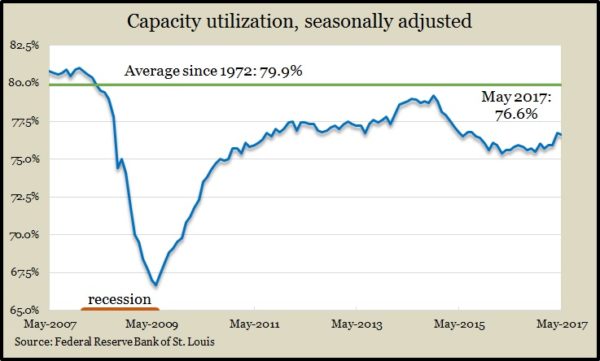 The departments of Commerce and Housing and Urban Development reported a dip in the annual rate of housing starts in May, the third decline in a row. The pace of residential building is back below pre-recession levels with single-family houses down 3.9% from April but up 8.5% from May 2016. Building permits slowed to lowest rate in 14 months, suggesting the thin supply of housing will continue.

A preliminary reading of consumer sentiment for June fell after six months of optimism, the University of Michigan reported. Expectations – which fuel consumer spending – as well as assessments of current conditions declined amid greater uncertainty over U.S. economic policies, according to survey researchers. An economist with the survey consumers are indicating a spending increase in 2017 of about 2.3%, which is about average for the last 17 years.