Declining house values accounted for about three-quarters of the drop in median net worth for American families during the Great Recession, according to a Federal Reserve report. Based on research done only once every three years, the report shows family net worth – all assets minus all liabilities – falling nearly 40% to $77,300 between 2007 to 2010. That’s the lowest net worth, adjusted for inflation, since 1992.

The rate of inflation at the wholesale level dipped more than analysts expected in May led by energy prices, specifically gasoline. The Bureau of Labor Statistics said the Producer Price Index grew 0.7% from the year before, making it the lowest annual inflation rate since October 2009. Even the core inflation rate – which strips out volatile food and energy costs – remained at an eight-month low. That may reflect slowing global demand tied to weakened economic growth.

Another sign of slowdown is a slight decline in retail sales in May – the second setback in a row. Of 13 major retailer categories, eight had lower sales revenue in May, led by gas stations. The year-to-year growth rate dipped to 5.3% from 5.6% in April but was well above the average of 4.5% since 1993. Healthy retail sales are a plus in an economy where consumer spending drives 70% of activity.

The broadest measure of inflation dipped in May, largely because of cheaper gasoline. The Bureau of Labor Statistics said the Consumer Price Index rose 1.7% since May 2011, less than analysts had forecast and down from a recent high of 3.9% in September. The core inflation rate, which strips out the volatile food and energy categories, grew by 2.3% in the last year. That’s below the historical 12-month rate of 3.9% and suggests the Federal Reserve might have a cushion for stimulating the economy without risking runaway inflation. 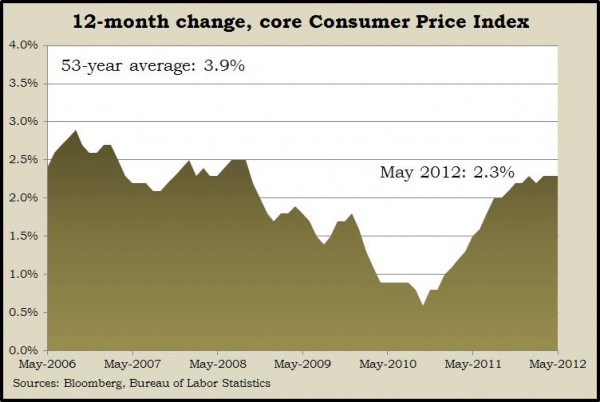 The moving four-week average for initial unemployment claims rose for the third week in a row, reflecting a stagnant labor market. Labor Department data show jobless claims hovering around where they were four years ago – 42% lower than the recession’s peak but still higher than average. Nearly three years into the economic recovery, unemployment remains a drag on growth.

The industrial production that has helped revive the U.S. economy lost momentum in May, according to the Federal Reserve. Both output and capacity use fell from April, mostly in manufacturing, which could be affected by a slowing global economy. Industries had 79% of their operations running in May, down from 79.2% in April. The 40-year average is 80.3%.

A preliminary read on consumer sentiment by the University of Michigan and Thomson Reuters showed outlooks dropping more than analysts had expected in early June. Surveys showed consumers less bullish about current conditions and plans for spending in coming months. The sentiment index dropped for the first time in eight months to its lowest reading since December.