The U.S. economy officially entered a recession after peaking in February, according to the National Bureau of Economic Research. A panel of independent academic economists determined that both employment and production peaked, marking the end of a 128-month economic expansion, the longest on record, dating back to 1854. The second-longest expansion was 120 months and ran from 1991 to 2001. Monday’s announcement was the bureau’s quickest. It took an average of eight months to determine the previous five downturns.

U.S. employers posted 5 million job openings in April, a decrease of 1.9 million or 28% from February. The Bureau of Labor Statistics reported further data illustrating the devastation from weeks of shutdowns to stifle spread of the COVID-19 virus. The number of Americans separated from their jobs in April totaled 9.9 million, following 14.6 million who were let go or quit in March. The number of workers hired reached 3.5 million, the fewest in 20 years of data. The gap between the number of job openings and the level of unemployment took a dramatic turn after nearly two years of signals that demand for workers exceeded supply. 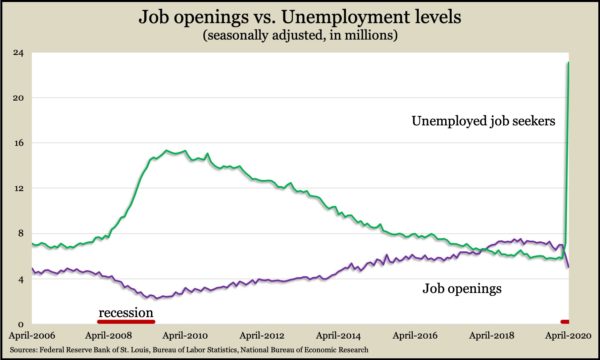 The broadest measure of inflation declined 0.1% in May, the third straight setback, reflecting the suppression of economic demand. The Consumer Price Index included lower prices for car insurance, gasoline, apparel, air fare and used vehicles, although the cost of housing and groceries increased. The so-called core CPI, stripping out volatile prices for energy and food, fell for the third month in a row, which never happened before in 63 years of data. Year-to-year, the core CPI showed a 1.2% inflation rate, half of the 2.4% rate posted in February.

Inflation on the wholesale level began to rebound in May as the Producer Price Index gained 0.4%, the first increase in four months. Meat prices led the recovery, climbing more than 40% from April. Prices for gasoline and small trucks also rose. Excluding volatile costs for food, energy and trade services, the core PPI rose 0.1% for its first increase in three months. Since May 2019, wholesale inflation overall rose 0.8% while the core rate declined 0.4%, the biggest drop in data going back to 2013.

Consumer sentiment continued to rise in early June, ticking up from April lows, according to a long-running survey by the University of Michigan. Because consumer spending makes up about 70% of U.S. gross domestic product, economists see consumer attitudes as clues to economic momentum. Although consumers’ feelings toward both current conditions and near-term prospects have improved, the survey found nagging fears related to additional waves of COVID-19 outbreak and repercussions from mass job losses. According to the report, about two-thirds of those surveyed expect financial woes for the economy in the next year.