In another sign of the improving job market, U.S. employers had a record number of job openings at the end of April. The Bureau of Labor Statistics reported that the level of hiring and separations remained flat from March, but the openings showed rising demand for workers, which could result in the wage increases needed for further consumer spending.

The Commerce Department said a 13-month high in sales growth outpaced the rise of wholesale inventories in April, suggesting companies are doing a better job keeping supply in line with demand. The ratio of inventories to sales, indicating how lean companies are, dropped for the first time in months but remained at levels not seen since the end of the Great Recession.

As with wholesalers, business inventories also rose in April, also behind faster sales growth. According to the Commerce Department, the telltale inventory-to-sales ratio remained unchanged from March, though it declined slightly in February and continues to hover at recessionary levels.

Separately, the Commerce Department reported that May retail sales rose a solid 1.2%, slightly lower than analysts’ forecasts but with broad gains across all categories except health and personal care stores. Sales grew more than expected after factoring out gas stations and car dealerships, which tend to have volatile monthly data. Overall, the report suggested improving economic prospects because consumer spending drives about 70% of the gross domestic product. However, year-to-year, retail revenue rose 2.7%, still lagging the long-term average of 4.5%. 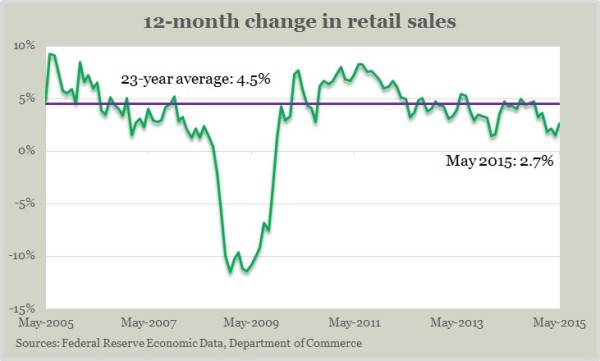 The moving four-week average for initial unemployment claims rose for the third week in a row after reaching a 15-year low. Labor Department data showed jobless claims have stayed below their long-term average since early 2013, suggesting persistent reluctance by employers to let workers go. That should help the hiring climate, eventually leading to wage growth, which could fuel further consumer spending.

The rate of inflation at the wholesale level dipped in May, the most since 2012 and a bit more than expected. Year-to-year, though, the Producer Price Index declined because of lower costs for food and energy. The Bureau of Labor Statistics said without those two volatile categories, the core wholesale inflation rate barely budged from April and rose only 0.6% since May 2014. Overall, the report gave little reason for the Federal Reserve to rush raising interest rates.

A preliminary June read on consumer sentiment by the University of Michigan showed outlooks rebounding from recent months, restoring projections that consumer spending might return to a normal 3% growth rate for the year. Researchers say consumers are basing their financial optimism on expected wage gains and continued low inflation.