The Federal Reserve Board reported another rise in consumer credit debt outstanding in April, although an indicator of consumer confidence slipped. Total debt rose at a 5.3% annual rate from March, but revolving credit, which mostly includes credit cards, declined for the 11th time in 14 months. The level of credit card debt was the second lowest it’s been in four years, a sign that consumers were reluctant to spend.

The U.S. trade deficit narrowed 8.2% to $69.8 billion in April after an all-time high of $75 billion in March. The Bureau of Economic Analysis said exports grew by 1.1%, led by commercial aircraft and oil-based industrial materials. Imports declined 1.4% in April, which might reflect production and shipping constraints in other countries still struggling from the global pandemic.

U.S. employers posted a record 9.3 million job openings in April, up nearly 1 million from March, with more than a third in hotels and restaurants. Data from the Bureau of Labor Statistics showed how much demand for workers is improving as more Americans are vaccinated and pandemic restrictions ease. The rates of workers laid off or fired from their jobs reached all-time lows in data collected since 2000. Also, the quits rate rose to a record high, suggesting more workers are confident of finding new jobs. 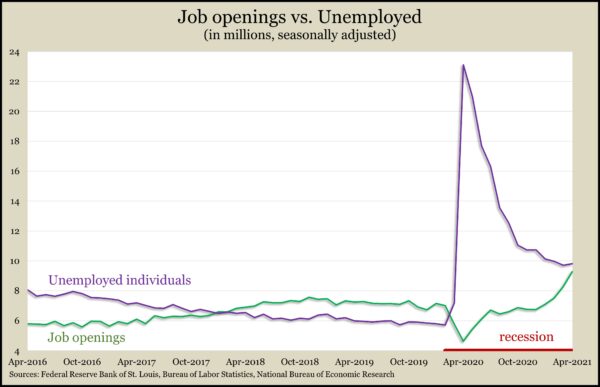 The four-week moving average of initial unemployment claims fell to within 8% of its 54-year average, declining for the ninth week in a row and the 17th time in 18 weeks. The Labor Department reported average first-time applications dipped to 402,500 after reaching a record 5.3 million in April 2020. More than 15.3 million Americans claimed jobless benefits in the latest week, 8.6 million tied to special pandemic relief programs.

The broadest measure of inflation rose 0.6% in May, more than a third of it from a 7.3% increase in used-car prices. The Bureau of Labor Statistics said its Consumer Price Index grew at a 12-month rate of 5%, the highest since August 2008. Excluding volatile prices for food and energy, the core CPI rose 3.8% from May 2020, its widest one-year advance since 1992. 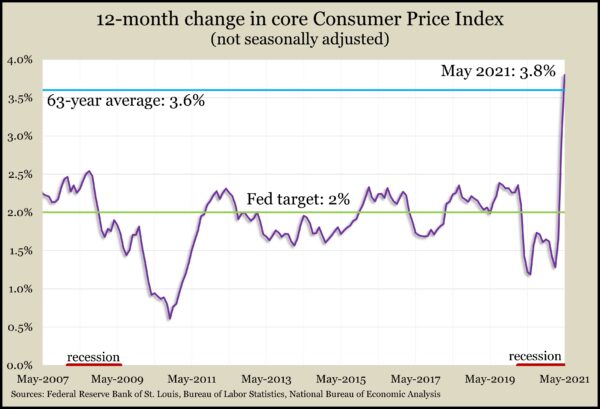 A preliminary look at consumer sentiment in June found increasing optimism, with expectations for rising unemployment at an all-time low. University of Michigan researchers said inflation remained a top concern for consumers, whose buying attitudes toward houses and cars dipped to the lowest levels since 1982. Overall though, researchers said, pent-up demand should desensitize consumers to prices at least temporarily as the economy emerges from pandemic-induced constraints.