Tight supply and steady demand continued to push home prices higher in March. The S&P/Case-Shiller home price index rose 6.8% year-to-year for the 20-city composite index, unchanged from the pace in February. A housing economist for Standard & Poor’s said house prices will keep escalating until inventories rise faster than sales or the economy slows significantly. He noted that price increases still are tame compared to the housing boom in the early 2000s.

The U.S. economy grew at a 2.2% annual rate in the first quarter, the fastest pace to start a year since 2015. That was slightly below an initial estimate of 2.3% and down from the 2.9% rate in the fourth quarter. The Bureau of Economic Analysis said the slower pace in gross domestic product came from downgraded estimates for inventory buildup, residential spending and exports. Consumer spending rose at a 1% annual rate, down from 1.1% in the initial estimate. The Federal Reserve’s favorite measure of inflation rose at a 2.3% rate, above the Fed’s target rate of 2%.

Pending contracts for existing house sales dropped 1.3% in January, the first decline in three months. But it was the fourth straight year-to-year decline, according to the National Association of Realtors. The trade association blamed “dire levels” of inventory for raising prices amid “robust” demand from would-be home buyers, who also face rising mortgage rates. The association still forecasts selling 5.54 million houses in 2018, which would be slightly more than 2017 sales.

The four-week moving average for initial unemployment claims rose for the second week in a row after reaching its lowest level since December 1969. New jobless applications remained 37% lower than the 51-year average, according to Labor Department data, indicating an extended reluctance by employers to let go of their workers. Economists say the tight labor market has been fueling the confidence that should lead to further consumer spending, which is the chief driver of U.S. economic growth.

Consumer spending rose 0.6% in April, which was twice the pace of income growth for the month, according to the Bureau of Economic Analysis. As a result, the personal saving rate declined for the second month in a row, reaching 2.8% of disposable income. Part of the increase in spending was because of higher gasoline costs. The latest monthly measure of the Fed’s preferred inflation gauge was 1.8% for the second month in a  row.

U.S. employers added 223,000 jobs in May, more than analysts expected and about 17% higher than the 12-month average. The Bureau of Labor Statistics reported broad gains across industries, led by retail, health care and construction. Average hourly wages rose 2.7% from May 2017. The unemployment rate dropped to 3.8%, the lowest since early 2000, which suggests wage increases could be heading higher. 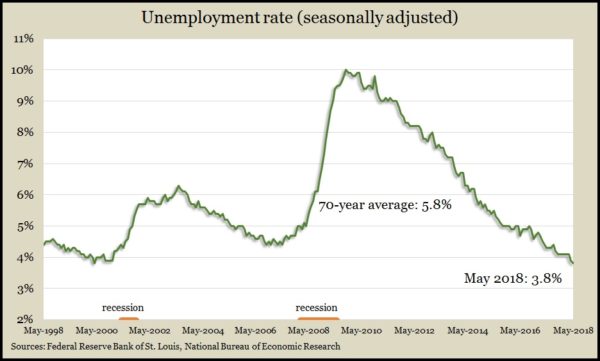 The annual rate of construction spending rose 1.8% in April, staying above the pre-recession high-water mark for the 19th consecutive month, according to the Commerce Department. Year-to-year, expenditures on building rose 7.6%, with a 9.4% rise in residential construction – in particular, single-family houses.

The manufacturing index of the Institute for Supply Management rose in May, indicating the 21st month in a row of expansion for the industry. Components for new orders, production and employment all grew at a faster rate than in April. The trade group said that based on past performance of the index and gross domestic product, the economy was growing at an annual pace of 4.8%.