Housing prices slumped for the 18th month in a row in March. The good news, according to the S&P/Case Shiller Home Price Index, is that the year-to-year price gap for the 20-city composite narrowed for the third month in a row. The 2.6% deficit was the slimmest since late 2010. Average house prices are the lowest they’ve been since the end of 2002, but the thinner losses suggest the double-dip for housing may gradually be turning.

Consumer confidence dipped in May, the second monthly decline in a row, according to the Conference Board. Consumers felt better about current conditions and less optimistic about the near future, but an improved outlook for income prospects indicates further moderate growth in the economy. 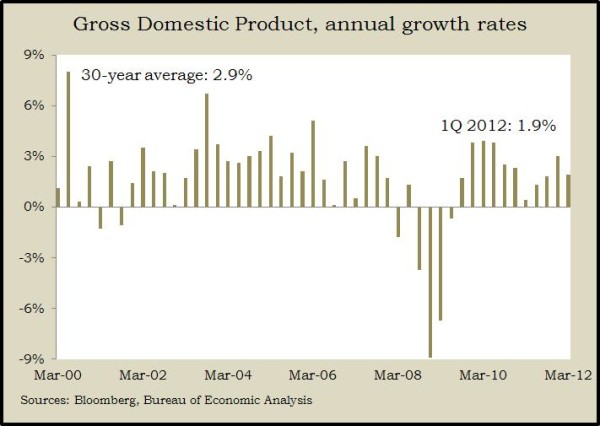 The moving four-week average for initial unemployment claims rose for the first time in four weeks. Despite the short-term setback, Labor Department data showed jobless claims 43% lower than the height of the recession. The average has been below the critical level of 400,000 claims since October.

Employers added 69,000 jobs in May, the least in a year and only about half of what analysts expected. The Bureau of Labor Statistics said it overestimated the payroll counts for the two previous months. Employers have been increasing employment for 20 months in a row but remain nearly 5 million below the level before the recession. The unemployment rate rose slightly to 8.2% with the percentage unemployed for 27 weeks or more increasing to 43%.

Personal income gained less than expected in April and was outpaced by personal spending, the Bureau of Economic Analysis said. On a 12-month basis, spending grew by 4%, vs. 2.8% for income. As a result, personal spending declined to 3.4% of disposable income, down from 4.3% as recently as September.

Manufacturing growth slowed in May but suggested continued economic expansion, according to the Institute for Supply Management. The trade group said the average performance of its index through the first five months of 2012 indicates Gross Domestic Product growth of 3.7% for the year, far above most economists’ forecasts.