U.S. manufacturers reported a 10th consecutive month of expansion in June, at the fastest pace in nearly three years. Purchasing managers surveyed for the ISM Manufacturing Index had positive comments about both current business conditions and the outlook, and 15 of the 18 industries represented reported growth Signs of revived global demand could be improving U.S. factory prospects, although government reports on manufacturing demand have been less enthusiastic.

An industry much less dependent on conditions abroad showed some stalling in May. Construction spending hit an annual rate of $1.23 trillion, the fourth consecutive month above the 2006 peak. The Commerce Department said the pace was unchanged from April, which was down 0.7% from March. Year-to-year comparisons showed construction spending up 4.5%, led by a 10.9% increase for residential building.

The annual sales pace of motor vehicle sales – a key component of consumer spending – dipped to 16.5 million in June, the second consecutive decline. Manufacturer reports gathered by Autodata Corp. showed sales at the lowest rate since 2014, down 5.3% from 12-month average. Truck sales continued to outpace cars both among imports and U.S.-made vehicles.

In a sign that manufacturing continues to struggle, the Commerce Department reported that factory orders declined 0.8% in May, the second setback in a row and worse than analysts expected. Excluding the volatile transportation equipment category, orders increased by 0.3% from April and by 5.8% from the same time last year. Another measure in the report suggested the second consecutive month of increased business investments, although such orders rose a weak 2.4% from the year before.

The U.S. trade deficit shrank in May as the result of the highest export levels since 2015 amid the first decline in imports in four months. The Bureau of Economic Analysis said the trade gap declined by 2.3% to $46.5 billion. Exports rose 0.4%, led by services but including goods such as automotive. Imports fell by 0.1%, which factored in lower prices for mobile phones.

The moving four-week average for initial unemployment claims rose for the fifth time in six weeks but remained near 43-year lows. In an ongoing sign that employers overall are reluctant to part with their workers, the Labor Department reported that jobless numbers remained below the 50-year average, where they have been consistently for more than four years.

Service businesses expanded in June – for the 90th month in a row, according to the Institute for Supply Management Non-Manufacturing Index. The largest sector of the U.S. economy is suggesting that the nation’s gross domestic product is expanding at a 3.3% annual rate, the purchasing managers group said.

Employers added 222,000 jobs in June, above the three-month average and more than analysts expected. The Bureau of Labor Statistics reported broad hiring among industries, with remarkable additions in health care, financial activities, mining and restaurants. The average hourly wage rose 2.5% from June 2016, below analyst expectations. The unemployment rate – a less reliable indicator of labor conditions – rose to 4.4% from May’s 4.3%, the lowest in 16 years. The rate rose largely because more job seekers entered the hiring market. A measure of underemployment also ticked up after finally recovering its pre-recession level in May. 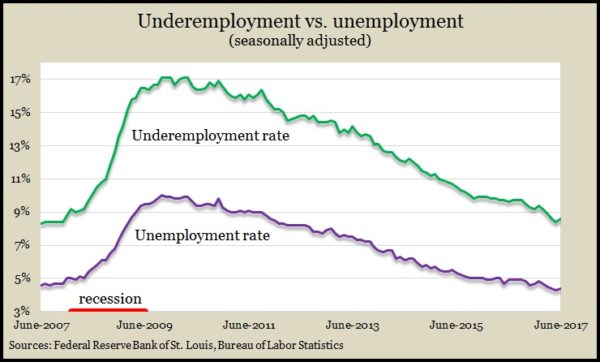