U.S. manufacturers expanded for the 22nd consecutive month in June, accelerating their pace for the third month in a row. Purchasing managers surveyed for the ISM Manufacturing Index reported some struggles building inventories because of slowing deliveries from suppliers, which they blamed on uncertainties over tariffs. None of the 18 industries surveyed indicated that business was contracting. The ISM said that based on historical experience, the June index reading correlated with a 5.2% annual rise in gross domestic product.

The Commerce Department said construction spending grew at an annual rate of $1.31 trillion in May, the 17th month in a row above the 2006 peak. The pace was up 0.4% from April and 4.5% ahead of the year-ago pace. A rise in residential spending helped boost the construction industry, led by multi-family housing for the month and single-family housing year-to-year.

The annual sales pace of motor vehicle sales rose in June, reaching 17.5 million cars and trucks, up 3.6% from May and up 4.6% from the year before. Sales of trucks continued to outpace cars, according to manufacturer reports gathered by Autodata Corp. The rate of domestic car sales stayed ahead of imports. Economists watch auto sales as a measure of consumer spending, which drives about 70% of U.S. economic activity.

In a sign that manufacturing continues to advance, the Commerce Department reported that factory orders rose 0.4% in May, the third gain in four months, staying 8.7% above year-ago levels. Orders for military aircraft led the increases. Excluding the volatile transportation equipment category, orders increased 7.7% from May 2017. Orders for non-military capital goods excluding aircraft rose 6.9% from the same time last year, suggesting a continued lag in business investments.

The moving four-week average for initial unemployment claims rose for the second week in a row but still hovered near the lowest levels in almost 50 years. The measure remains 37% below the 51-year average, which it has been below every week since early 2013, according to Labor Department data. The persistently low level of jobless claims is evidence that employers are reluctant to let workers loose amid a tight labor market.

Service-sector businesses expanded in June for the 101st month in a row, according to the Institute for Supply Management Non-Manufacturing Index. The largest segment of the U.S. economy is suggesting that the nation’s gross domestic product is expanding at a 3.7% annual rate, the purchasing managers group said. The rate of increase beat what analysts had expected. Only the agricultural industry reported that business was contracting. Though respondents expressed optimism for business conditions and the overall economy, they also cited uncertainty over tariffs and production capacity.

Employers added a higher-than-expected 213,000 jobs in June, making a record 93rd consecutive month of payroll expansion, according to the Bureau of Labor Statistics. Revised estimates showed employers adding 37,000 more jobs in April and May than previously reported. Average wages, which analysts have been watching as a sign of nascent inflation, rose 2.7% from the year before – still a tepid rate, considering strong hiring conditions. The bureau’s separate survey of households estimated unemployment at 4% of the labor force, down from an 18-year low of 3.8% in May. The rise reflected an 8% increase in the number of job seekers, suggesting sidelined workers felt encouraged to get back in the game. 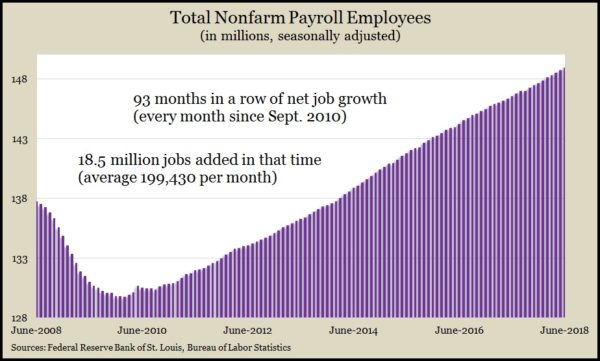 The U.S. trade deficit shrank 6.6% in May to $43.1 billion, the narrowest gap since October 2016. According to the Bureau of Economic Analysis, the value of exports rose 1.9% to the highest level ever, led by commercial aircraft and soybeans. Imports rose 0.4%.