Manufacturing shrank in June for the first time in 36 months, according to the Institute for Supply Management. Boosted by its ties to emerging markets in less-developed countries, manufacturing had led the U.S. economy out of the Great Recession. Now, a slowdown in global markets, including in China, is cutting into U.S. expansion. New orders contracted for the first time since April 2009 and at the steepest decline since just after the 9/11 attacks. 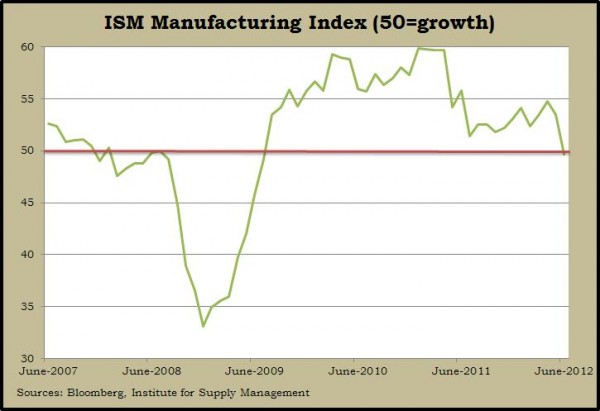 In a reversal of much of the economic headlines in the last three years, construction spending rose in May – even while manufacturing slowed. The Department of Commerce reported higher-than-expected figures, including an upward revision of April’s sales. Private housing led the monthly gain. Construction overall climbed 7% from May 2011.

Auto dealers sold an annualized rate of nearly 14.1 million vehicles in June, according to Auto Data Corp. That beat analyst forecasts and was up 2.2% from May and up 22% from June 2011. With manufacturing weakening, consumer spending is becoming a more important driver of economic activity.

Markets and most government agencies closed for Independence Day.

Although at its weakest point in more than two years, non-manufacturing expanded for the 30th month in row in June. The Institute for Supply Management said purchasing managers are experiencing slower business, although most components pointed to continued mild growth. Employment even showed signs of accelerating.

The moving four-week average for initial unemployment claims dipped for the second week in a row following four consecutive increases. The average has been below the critical 400,000 level for eight months but has resisted further declines more recently. The latest weekly claims dipped to their lowest point in six weeks.

Employers added fewer jobs than expected in June and fewer than initially estimated in May and April, the Labor Department said. Hiring remains the most vexing part of the economic recovery, which officially began three years ago. The U.S. is still 4.9 million jobs short of where it was before the Great Recession. The June unemployment rate stayed at 8.2%. One possible silver lining is that temporary employment continued growing, which historically suggests that more openings for permanent positions are on their way.