Manufacturing revived a bit in June, expanding slightly after contracting in April, according to the Institute for Supply Management. Boosted by its ties to emerging markets in less-developed countries, manufacturing had led the U.S. economy out of the Great Recession. Now, a slowdown in global markets, including in China, is making the U.S. more reliant on domestic consumer spending, fueled by such sectors as housing and automotive.

Auto dealers sold an annualized rate of nearly 16 million vehicles in June, according to Auto Data Corp. That was the highest rate since 2007, beating analyst forecasts and rising 4.2% from the May rate and 11% from June 2012.

The Commerce Department said factory orders – usually a volatile indicator – rose in May for the second month in a row and the third time in four months.  A proxy for business investments – capital goods orders excluding defense and aircraft orders – rose for the third month in a row.

The U.S. trade deficit widened by 12.1% to $45 billion in May, the Bureau of Economic Analysis said. Exports fell by 0.3%, reflecting weaker demand abroad, and imports rose 1.9%, indicating more spending on foreign-made goods and services by American consumers and businesses. 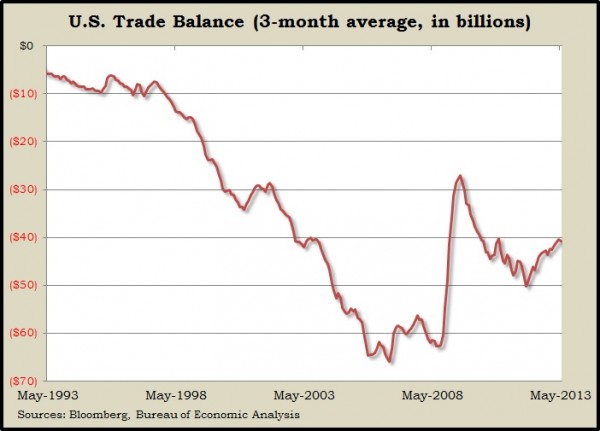 Although at its weakest point in more than three years, the nation’s non-manufacturing sector expanded for the 42nd month in row in June. The Institute for Supply Management said purchasing managers are expressing mixed opinions about current business conditions, but most expect incremental growth that’s better than the same time last year.

The moving four-week average for initial unemployment claims dipped for the third time in four weeks and remained below long-range averages and near the low point of the recovery. The Labor Department figures suggested a continued reluctance to let go of workers.

Markets and most government agencies closed for Independence Day

Employers added more jobs than expected in June and more than initially estimated in May and April, the Bureau of Labor Statistics reported. Hiring remains a sticking point in the economic expansion, and payrolls remain 2.1 million jobs or 1.6% behind the peak in early 2008. Signs of hope included the 15th month in a row of gains in temporary jobs – considered a harbinger of future hiring. Also, average wages increased more than analysts expected, suggesting rising demand for workers. The unemployment rate stayed at 7.6%.